By Andrea Laycock in the Winter 2000 Issue 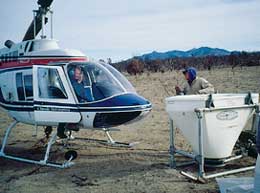 After a 1999 wildfire near Eureka, Utah, professor Bruce Roundy designed this helicopter reseeding project to test how native plants would resist cheatgrass, a fire-causing weed.

As one of the western United States’ worst wildfire seasons concludes, a team of BYU professors is working to cut off the problem at its source a highly flammable weed called cheatgrass, which increasingly infests western grasslands.

Known to hikers and ranchers by its sharp-tipped seeds that must be yanked from socks at the end of a day, cheatgrass dies early in the summer, leaving thousands of acres of dried-out stalks to fuel potential wildfires.

BYU researchers Bruce A. Roundy and Daniel J. Fairbanks are approaching the cheatgrass problem from two different directions. While Roundy tests the ability of native plants to compete against the weed, Fairbanks studies its genetic makeup in order to design a counteroffensive.

Susan Meyer, a plant ecologist at the U.S. Forest Service Federal Shrub Sciences Laboratory, works with BYU professors on the cheatgrass problem. “Genetic research is a major component of this investigation,” she says. “And it couldn’t be done without the expertise of BYU’s professors and students.”

Fairbanks, a professor of botany and range science, is exploring the structure of cheatgrass, a pursuit that will enable him to discover which strains of the weed will be most susceptible to smuta fungus that stops cheatgrass from reproducing.

“The impact of the smut fungus research is potentially tremendous,” Fairbanks says. “Cheatgrass is one of the most invasive species in the United States, and the fungus provides a way of allowing the ecosystem to be restored.”

Alisa P. Ramakrishnan, a master’s degree candidate in botany from Boulder, Colo., uses BYU’s DNA sequencing machine to spell out the weed’s genetic code. “There are different strains of fungus and different strains of cheatgrass,” she says. “We need to know how many kinds of cheatgrass there are so we can whack them with the right kind of fungus.”

While Fairbanks studies cheatgrass in the laboratory, Roundy, chair of the Department of Botany and Range Science, studies it while walking through acres of the flammable grass.

After a fire burned 60,000 acres in Tintic Valley near Eureka, Utah, last year, Roundy designed a study to test how native plants would resist cheatgrass in post-fire conditions. He joined with the Shrub Science Laboratory to determine if native plants such as bluebunch wheatgrass, sagebrush, and Indian ricegrass could be planted after fires to prevent cheatgrass from growing back and to increase plant diversity. Twenty acres of charred land became a test bed, and native seeds were planted by helicopter to see if the indigenous plants could hold their own against the cheatgrass onslaught.

“We are trying to discover how to restore our ecosystem using native plants to keep cheatgrass out, decrease soil erosion, and increase the wildlife that frequent the area,” Roundy says. The project is still being evaluated by Tyler W. Thompson, a master’s degree candidate in wildlife and range resources from Orem, Utah.

Sometimes the heart and the mind don’t learn at the same pace.

Chelsea Stenson Rippy decided to start her own clothing company.

Inspiring stories from athletes and others seeking spiritual glory.