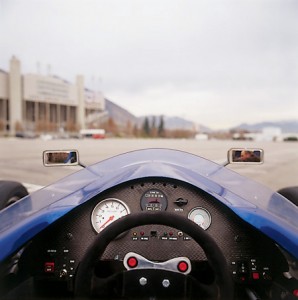 Almost anyone would be cool behind the wheel of Electric Blue. By Peter B. Gardner, ’98, Associate Editor

IT was no time for philosophy. Tearing around the parking lot just west of LaVell Edwards Stadium in an electric Indy-style racecar, I had more pertinent things to consider. But from the moment I’d sat down low in Electric Blue with its four open wheels poised for more action, its deceptively quiet motor humming, and its lustrous blue body even bluer under the crisp autumn sky, I couldn’t help but contemplate the miraculous metamorphosis that had taken place in me. In the traditionally male domain of automobiles, I had never before even approached the outskirts of cool. Guys are supposed to know how a carburetor works, how to replace an engine, and the model and year of every car at a glance. I, on the other hand, had to look up the spelling of carburetor. The only items under the hood I can identify with confidence are the fluid containers and the battery. One memorable conversation I had with a car mechanic, as he surveyed the damage, went something like this:“Yep. Looks like your cam shaft is frozen up.” “Ri-ight,” I responded knowingly, adding, “Is that bad?” Casting me a pathetic glance, he explained that the car was now worth less than a cheap bike. But as I sped around the parking lot, all that was behind me, diminished into insignificance. Now I was cool. I was driving the car that had set a world speed record for electric cars in its class. Never mind that I was probably the 10th reporter to take a turn driving BYU‘s Electric Blue. Never mind that my moment of fame would be over as soon as I left the seat. For a magical lap it was just me and Electric Blue, a sleek synthesis of cool streaking back to an admiring crowd, where a woman was shouting something out to me.“Can’t you go faster than that?” Ouch. “You’d better try again.” Hey! “And go faster this time.” Why, I oughtta . . .After my conspicuously quicker second lap, someone couldn’t resist pointing out that a female undergraduate student’s drive had been much more impressive, effectively grinding my shards of coolness into powder. But I reminded myself that the car ride was just an added bonus for reporters. The real event was General Motors’ newest donation to BYU‘s fleet of electric cars–a GM EV1. We circled the silver, tear-drop-shaped commuter car as the GM rep explained power trains, valve-regulated lead-acid battery cells, torque curves, and a bunch of other things completely lost on me. Then he described ways electric cars may someday revolutionize transportation. Ultra-aerodynamic, emission-free vehicles like the EV1 will mean less pollution in our skies and more money in our wallets. While less flashy than the racecar, these new wheels represent what the future may hold. And with the donation, BYU, a GM partner school, will have an opportunity to help create that future, as faculty and students learn from the car and try to make it even more fuel efficient. Cool, I thought as I sat down behind the EV1 steering wheel and imagined the future.In nearly a decade at BYU as an undergraduate, graduate student, and employee, I have sat in a lot of cool seats. On a padded chair in the Joseph Smith Building auditorium, I listened to my freshman biology professor speak glowingly of his research of high-mountain lichens, actually getting me to care. Cool. Sitting on the LaVell Edwards Stadium north bleachers, I watched BYU defeat Texas A&M at the outset of the glorious 1996 football season. Cool. In the Marriott Center stands I have sat among captivated student and faculty audiences listening to speakers ranging from Church of Jesus Christ President Gordon B. Hinckley to distinguished campus professors and administrators to Justice Sandra Day O’Connor. Very cool. For magazine articles I’ve sat on chairs in corners of cramped campus offices, discussing the world’s progress and problems with some of BYU‘s greatest minds. Cooler still. And on one autumn morning, I sat low in Electric Blue with the wind rushing through my hair as I circled the stadium parking lot. Well, nearly cool.In my associations with BYU I have had a front-row seat to observe thousands who make this place and the world flourish–academically, socially, and spiritually. While I’m no expert myself, as part of BYU I get to enjoy the talents of experts and revel in their achievements. I guess cool by association will have to do.

A Web of Threats

From Death and Despair to More Life

In Descent from the Cross, Brian Kershisnik wanted to “paint the darkest point.”