What kind of musician waits 14 years to release a recording, makes only 500 copies, and then sells each for more than $100? That would be La Monte Young.

Never heard of him? You’ve definitely heard of the artists he’s influenced: David Bowie, The Talking Heads, and The Velvet Underground are a few. Artists Yoko Ono and Andy Warhol and composer Philip Glass come to mind. In fact, Young is considered the father of an entire genre of music. 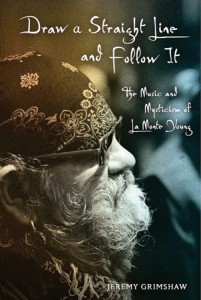 “La Monte Young is the most famous and influential composer that you’ve maybe never heard of,” says BYU assistant music professor Jeremy N. Grimshaw, whose new, Oxford-published biography, Draw a Straight Line and Follow It, chronicles the life and works of the reclusive musician.

The book traces Young’s life, starting in Bern, Idaho, where he was born to an LDS sheepherder in 1935. The family later moved to manage a celery farm in American Fork, Utah, where Young was taught by local music legend K. J. Bird. After attending school in California, Young moved to New York City, where he explored minimalist music, a style featuring sustained harmonies, a pensive mood, and long, drawn-out individual tones.

Fellow minimalist Brian Eno calls Young “the daddy of us all.” Young influenced the many rock records Eno has produced, including U2’s most popular albums and Coldplay’s most recent. But Young’s influence goes beyond A-listers.

“You hear minimalism or music influenced by it every day—in TV commercials, in film scores, in documentary scores,” Grimshaw says.

While Young left the Church early in his career, Grimshaw writes about how being raised LDS infused spirituality and a quest for greater meaning in Young’s music. Today Young, 76, lives in New York City, making only occasional public appearances.

“One can hardly imagine a sharper cultural contrast than that between Young’s early years and his later experiences,” Grimshaw says. “I’ve been to the tiny cabin in the middle of nowhere where Young was born. Then I think of him hanging out in Yoko Ono’s loft in 1960 in downtown New York. I wonder to myself, ‘How did that guy get from here to there?’ That, to me, is the amazing story.”

A Museum of Art exhibit examines the art of the Weir family, which expanded the traditions of American art.