As a performer, his voice had taken him to the Metropolitan Opera, Carnegie Hall, and other renowned stages. He and his wife, Jennifer, also an acclaimed opera soloist, had never lived anywhere for more than two years. The idea of leaving behind his opera career to settle in one place and teach had left him uncertain.

But in a faculty meeting that first week, his new college dean brought an old photo of former music faculty members standing in front of the Maeser Building. “There was something about that small group of steadfast musicians that inspired me,” he says.

Even more impactful, Babidge remembers, was a faculty discussion of a 1967 talk President Spencer W. Kimball gave at BYU. In “Education for Eternity,” President Kimball reflected on the vocal gifts of opera singers Enrico Caruso, Adelina Patti, and Jenny Lind, then argued, “Our day, our time, our people, our generation, our BYU should produce such, as we catch the total vision of our potential and dream dreams and see visions of the future.”

Overcome, Babidge remained quiet in the meeting. But when he returned to his office, he made a copy of the old faculty photo, framed it, and put it on a nearby bookshelf. And reflecting on the artists President Kimball mentioned in his address, he had an epiphany.

“Two of them received their training from mentors,” Babidge explains. “And at that moment, I realized I could make a real musical contribution to [my] students.” Even today, Babidge cannot discuss the prophet’s charge without becoming emotional.

Darrell Babidge’s office walls, packed with photos and memorabilia, offer glimpses into both his own opera performances and those of his students. Photo by Nathalie Van Empel.

“Our day, our time, our people, our generation, our BYU should produce [vocal masters], as we catch the total vision of our potential.”

Committed to his new role as mentor, he settled in, hanging family photos and opera memorabilia on his office walls. And in the last seven years, his own mementos have been joined by images of his students, many of whom are already finding professional success in opera. Except for a bank of windows that lets light spill into his office, the walls are jammed.

At a recent SCERA Center for the Arts Star Awards gala, Babidge was honored for his contributions to music, both in performing and in teaching. At the event BYU School of Music director Kory L. Katseanes praised Babidge’s “artistry, first of all, as a performer and singer,” but also noted that he “is becoming one of the world’s most sought-after vocal coaches. And the success of his BYU students . . . has been so dramatic and stellar.”

Among his protégés are Rachel Willis-Sørensen (BM ’08, MM ’09) and Rebecca A. Pedersen (’15), both of whom won the rigorous Metropolitan Opera’s National Council Auditions.

And baritone Shea M. Owens (BM ’10), who has performed with multiple opera companies over the past few years, credits Babidge with helping make his career possible.

“I had many excellent teachers at BYU,” Owens says, “but Professor Babidge has stayed with me. He frequently checks on my progress, and when we are in the same area, I take master classes from him. He has even given me lessons on FaceTime. I owe him so much.”

Among Babidge’s gifts is an ability to put a laser focus on the individual student he is teaching. He is careful, he says, “to adjust my methods to what a specific student needs. Sometimes I will come up with a technique I didn’t know I knew, because instinctively I know it will work for that student.”

Adds Pedersen, “When I am having a lesson, he is completely focused on me and my needs. He can change his personality, almost, to focus on my needs, but the minute his next student comes in, you can see him change again for that student.”

Watching Babidge teach a master class provides a glimpse into both his musical passion and his mentoring style. When a student does something he especially likes, his voice rises instinctively as he shouts, “Yes, yes. You’ve got it!” or “That is absolutely perfect!” Other times he demonstrates his approval by slapping his hand on the desk. And the violin professor whose office is directly above Babidge’s often jokingly teases him about his yelling.

“I guess I do a lot of yelling,” Babidge admits, “but it’s not out of anger. It’s out of excitement.”

Regardless of his methods, Babidge is fully invested in his latest role. And for that role, he received the Young Scholar Award at BYU’s 2014 Annual University Conference. “I am not a scholar by any means,” he acknowledges, but says he received the award because of the way he mentors. 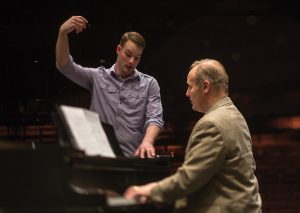 Vocal performance major Tyrell M. Wilde (’17) says Babidge is “very patient” when he teaches and describes his mentoring style as uniquely intuitive: “If I’m having a hard time with a certain vowel or a note, he’ll have this idea pop into his head—it’s almost bizarre—and it will help me get over the hurdle.” Photo by Bradley Slade.

For some students, that mentorship continues even after leaving BYU. “Students who have finished the program will continue to come back and work with him,” BYU music professor Diane T. Reich said at the SCERA gala. “They will Skype in from Spain or Germany or wherever they might be.”

His students realize they are receiving an enormous amount of nurturing, instruction, and care, she added. “As those students go out into the world, that’s where his influence will continue to be felt.”

Willis-Sørensen, who now lives in Germany, practices with Babidge via Skype or FaceTime before her concerts and details the personal nature of his teaching.

“A session with Darrell usually begins with a few minutes of catching up and sharing funny stories,” she says. “Some might consider this wasted time, but he knows I will sing better if I am at ease. We’ve never discussed it; I just know he knows that’s how I operate.”

After chatting, they move into a warm-up and then her repertoire. “Depending on how well it’s going, he will stop a trillion times and make suggestions on how to improve things.” Ultimately, says Willis-Sørensen, “I always do so much better during and after a lesson with him.”

In addition to keeping up with former students through online lessons, Babidge makes it a point, whenever possible, to applaud from the audience when they land major opera roles, whether their performances are stateside or abroad.

Sitting as an audience member is not a position he expected to be in when he was studying and honing his own craft at England’s Royal Northern College of Music and at BYU: he planned to perform. And even though he had worked as a teaching assistant during his time at BYU, he says, the idea of teaching as a career “was off my radar.”

But after he and Jennifer left New York City and moved to Utah to raise their kids—“We figured we could fly anywhere for our careers,” he says—BYU made an offer.

Despite his initial hesitation to accept the position, it was clear even from that first week that his decision was the right one.

“I’m having a wonderful time with many incredible students,” he says, noting that he considers his work more of a joy than a job. “Seeing them succeed is enormously satisfying.”

Participants in an alumni tour to the South Pacific will enjoy performances of BYU's highly acclaimed Living Legends.

Killian's name was called as one of five Grand National Finals winners in what is considered the Olympics of opera.