By Merrill J. Bateman in the Winter 2001 Issue 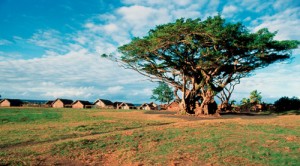 As the parent trunk of the Church Educational System banyan tree, BYU sends out branches of influence spreading around the earth and touching down to bless lives in distant places

It seems only a short time ago that Brigham Young University completed its first century. Now one-fourth of the second century has elapsed. I remember the interest among the faculty and students in 1975 as the university celebrated the achievements of the first 100 years. Excitement surrounded President Spencer W. Kimball’s second-century address—an October 1975 devotional in which he provided guideposts for the future and spoke of BYU becoming an “educational Everest” (“The Second Century of Brigham Young University,” Speeches of the Year, 1975 [Provo: BYU Press, 1976], p. 244). His vision for BYU in its second century parallels this year’s Annual University Conference theme, President Brigham Young’s admonition that “we should be a people of profound learning” (Journal of Discourses [JD] [London: Latter-day Saints Book Depot, 1854–86], vol. 8, p. 40). The thoughts of both Presidents Young and Kimball are similar to those echoed by other prophets of this dispensation. In fact, President John Taylor not only believed we should become a learned people but foresaw the day of Zion’s excellence. He stated:You will see the day that Zion will be as far ahead of the outside world in everything pertaining to learning of every kind as we are to-day in regard to religious matters. You mark my words, and write them down, and see if they do not come to pass. [JD, vol. 21, p. 100]In like manner, President Gordon B. Hinckley has spoken of the importance of obtaining an education and has counseled members that they are under “commandment to continue to study and to learn” (Teachings of Gordon B. Hinckley [Salt Lake City: Deseret Book, 1997], p. 300).None of us can assume that he has learned enough. As the door closes on one phase of life, it opens on another, where we must continue to pursue knowledge. Ours ought to be a ceaseless quest for truth. [Teachings, p. 301]The words of our prophets, present and past, inspire us toward educational excellence. They remind us of the intellectual and spiritual foundations provided by those who preceded us and upon which we build. They point to the future of becoming a people of profound learning and inquiry.Leaders and TeachersThe role of Brigham Young University during the first 100 years was clear. It was to strengthen members and provide faithful leaders and teachers for the Church. Brigham Young Academy principal Karl G. Maeser, faced with numerous problems in the 1880s, decided to leave the young school. He changed his mind, however, when in a dream he saw tens of thousands of Church members who would be blessed by a modern university on Temple Hill.Three decades later BYU President Franklin S. Harris, ’07, after a meeting with the board of trustees in 1921, recognized the university’s role in providing leaders in all disciplines. He said:The President of the Church, Commission of Education, and all who have anything to do with the Church schools are determined to make this the great Church University. . . . When someone tells you that all the institution will do will be to prepare teachers, tell them they don’t know what they are talking about. There is nothing greater than to be a teacher, but the school will have to prepare leaders in other directions just as well. . . . All Mormondom cannot be educated here, but I hope to see the time when two of a city . . . will come here to become leaders. [In Ernest L. Wilkinson and W. Cleon Skousen, Brigham Young University: A School of Destiny (Provo: BYU Press, 1976), p. 239]In addition President Heber J. Grant recognized the role of BYU in providing teachers for the Church educational system. In the depths of the 1930s depression, financial pressures caused the First Presidency to announce the closure of all Church schools, including Brigham Young University. In a meeting following the announcement, a key member of the BYU Board of Trustees asked President Grant who would provide teachers for the Church. After a moment of reflection, the president reversed his decision regarding this institution. Most other Church schools were closed or given to the public sector.From the beginning the mandate was clear. Brigham Young University’s role was to build testimony, prepare students for their work in the world, and provide teachers and leaders for the Church.A Model of Profound Learning

The Parent trunk in provo must be extraordinary both spiritually and secularly if the reach is to be infinite. In particular, it just be a part of the “True Vine”. 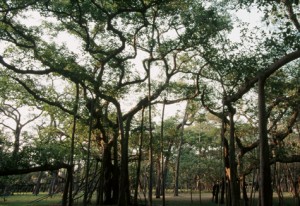 Eventually the Banyan Tree will be transformed into a beautiful white tree with fruit that is delicious to the taste. The tree will shine as a standard for the nations.

dual nature. The light emanating from the tree will be of infinite power, and people will embrace the light and their knowledge will become perfect.Most of us have planted the seed of the tree in our hearts. We have nourished the seed and it has sprouted. A swelling motion has told us that it is a good seed (see Alma 32:28–43). We do not know all things now, but if we continue we will become an integral part of the tree and enjoy its perfect light. May the Lord bless us to this end is my prayer in the name of Jesus Christ, amen.

Merrill J. Bateman is the president of BYU. This article is condensed from an address given to BYU faculty and staff at Annual University Conference, Aug. 27, 2001. The full text of this speech is online at speeches.byu.edu/.

The Tree of Wisdom has become a campus landmark.

Overheard ridiculous claims lead to confusion and hilarity in this comic retelling of BYU shenanigans.