Three considerations can help adults determine whether adoption is right for them.

Six years ago,  Alison Robertson gave birth to a baby girl, the first of several children she and her husband, Kent, hoped to have. Since then, though, they’ve been unable to have more children. They began thinking about adoption several years ago and recently decided to get serious about it. But they have questions—and anxieties. Should they wait the one to three years it will probably take to adopt a newborn? Or should they look for an older child who would be more readily available but might have a challenging history? Alison worries about the likelihood of having to interact with the birth parents since nearly all adoptions today are at least partly open. Kent worries about whether his parents will be able to accept an adopted grandchild. Both wonder whether they can love an adopted child as much as they love their birth daughter.

Most people considering adoption have questions like those of Alison and Kent, a hypothetical couple. The answers lie in self-reflection, gathering information, and thorough discussion with extended family, those who have adoption experience, adoption counselors, and their spouse. Good answers will yield both a good decision and, if the decision is to go forward, an increased likelihood of a successful adoption. Adoption expert Jini Lyman Roby (BS ’77), an attorney and assistant professor of social work at BYU, suggests three considerations for prospective adoptive parents—motivation, ability to bond, and desire to accept a new culture.

What Is My Motivation?

People adopt for different reasons. Some want a family beyond what they are able to have biologically. Others have biological children but enjoy enough resources and love that they want to bless the lives of more children. Still others are motivated by the desire to provide a family to children who otherwise would not have one.

“Most people who adopt go into it with very pure motives of either wanting to have more children in their families or really being interested in serving the children’s best interests. Those are both very good reasons—and not mutually exclusive,” says Roby.

Being aware of motives matters, says Roby, because motivation influences how you handle possible complications of adoption. Everyone has a mixture of motives, but if you find you’re adopting more for your own need to nurture, chances are you are better suited for a newborn adoption. If you’re more motivated by wanting to offer a home and loving family setting to a child from difficult circumstances, you could be well-suited to adopting a child who has been in the foster-care system or an orphanage and, therefore, may present additional challenges. “It’s a really important threshold question,” says Roby. “Neither answer is right or wrong, but you need to know because of the implications.”

Can I Fully Bond with an Adopted Child?

One of the most common questions people considering adoption ask is whether they can love an adopted child as much as they could a biological child. Roby believes it’s difficult to know the answer ahead of time, but experiences with other people’s children will give you a good idea of whether you would be able to extend your love and affection to an adopted child. People who have volunteered as mentors, for example, or who have close relationships with nieces, nephews, or the children of friends, can gauge their ability to bond with children from these experiences. Some people become foster parents to test this ability. 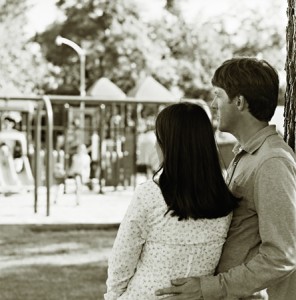 The decision to adopt or not can be a challenging one. A BYU professor offers questions that those considering adoption can ask to determine if it is right for them. Photo by Bradley Slade.

It’s important to be honest as you evaluate yourself in this area, says Roby. “I know people who will not adopt because they know that they could never really love a child that wasn’t biologically theirs. They feel adoption would be unfair to the child.”

Most parents, though, have no problem bonding with their adopted child. A 1994 study showed that by adolescence, children adopted at birth have “extremely high rates of strong attachment to adoptive parents.” The study, funded by the National Institute of Mental Health, concluded that “the vast majority of adoptive families . . . master a crucial process important to healthy development.” (The research did not investigate children adopted at later ages.)

Would I Embrace an Adopted Child’s History?

An adoption issue that Roby believes is underexamined is the reality that adopted children bring with them a personal history, even if they’re newborns. Prospective adoptive parents should consider whether they’re willing to integrate their child’s heritage into their own, especially if the child is from another race, ethnic background, or culture. “At the moment you’re born, all of your family life—your mother’s life, your father’s life, your ancestors, your family history—is a part of you. Every child has that. Even if they don’t know it, that’s a part of who they are,” says Roby.

Some adoptive parents think they should de-emphasize their child’s past or heritage, thinking a child might be confused by dual heritages. But numerous studies have shown that integrating a child’s heritage from his or her biological parents is healthy and desirable. People considering adoption should be willing to learn about another heritage and help their child integrate it into his or her identity, says Roby.

“Some think that recognizing the child’s personal past and family history before he or she arrived in their family somehow sets the child apart. But it’s there anyway. It’s a given. Not acknowledging it may give the impression that what the child brings is not acceptable.”

Sometimes an older adopted child’s personal history includes abuse, neglect, or exploitation. Those considering adoption might ask themselves if they’re willing to deal with the implications of such a history. When a biological child has health or psychological problems, most parents assume the cause is in their bloodline or in their parenting, and they accept the problems and deal with them. “But if such problems show up in an adopted child, how will you respond?” says Roby. “What if the child is aggressive? What if she has attachment disorder problems? What if he steals or lies? Will you be able to accept the problems and stand by your adopted children and struggle with them?”

Many people underestimate their ability to handle these challenges, says Roby. Being aware that they’re a possibility and assessing your resources ahead of time can mitigate the impact of problems should they occur. For example, you might assess the support your extended family can provide, investigate whether your community has a child psychologist, and understand your insurance coverage.

In the end, those considering adoption might view the decision as analogous to a marriage decision. But unlike a prospective spouse, a prospective adopted child is a vulnerable, dependent person you’re taking responsibility for—for a very long time. And just as the happily-ever-after myths of marriage should be resisted, so should the happily-ever-after myths of adoption.

“Adoption is most often the happy ending that is hoped for. However, at times it requires more than love or the desire to parent. It may require commitment, patience, and even expert help,” says Roby.

As you gather information, become more aware of your motives and resources, and understand the potential problems and blessings of adoption, the decision whether or not to adopt will likely come into focus. Roby urges people not to neglect the spiritual dimension of the decision—earnestly seeking an answer through prayer, fasting, temple attendance, and family councils. When the adoption decision is carefully and thoughtfully made, she says, adopting a child can be one of the most fulfilling experiences of a person’s life.

“Adoption calls for careful decision making, relying on the guidance of the Spirit,” says Roby. “Then there must be the loving and nurturing, and sometimes enduring through difficult times with faith and patience. But it is all worth it, as the gift of a family is the greatest gift of all, after the gift of life itself.”

What is your motivation for wanting to adopt?

Can you fully love and bond with a child who is not biologically related to you?

If you adopt an older child, can you accept the increased possibility that the child will have health and psychological problems?

Will you have the support you need from extended family and friends?

Are you willing to help an adopted child integrate her biological and cultural heritage, as far as they’re known, into her identity?

Do you have the financial resources to adequately care for an adopted child?

Does your community have resources available for families with adopted children?

Sue Bergin is an adjunct faculty member in the BYU Honors Program and a writer and editor in Orem, Utah.

Motivated by his own tumultuous childhood, a new law grad plans to advocate for those in need.

Meet the Smiths, a couple who opened their hearts and home to some 150 foster children.