How we can help children become wise stewards of their bodies. 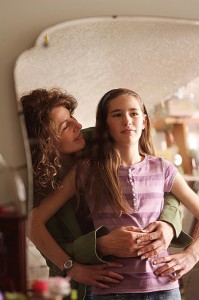 “These body messages that you must be thin or muscular or perfectly sculpted are everywhere. It’s on TV, it’s on the radio, it’s on billboards – you cannot escape it.” – Diane Spangler

The statistics are alarming. About 33 percent of children are obese, far more than a few decades ago. At least 15 percent of all girls have some form of eating disorder, and about 6 percent suffer from life-threatening anorexia or bulimia.

It might seem odd to mention obesity and anorexia in the same breath. Aren’t they polar opposites? While very different in effect, the two are closely related, says associate professor of psychology Diane L. Spangler, who has been studying eating disorders for more than a decade. At the root of eating disorders, obesity, and less-severe body-image and eating problems, she says, are problematic beliefs and behaviors.

Spangler’s pioneering studies on the role of thoughts and beliefs in eating disorders have yielded effective new cognitive therapies currently offered through BYU’s Comprehensive Clinic. Drawing from her own research and from her groundbreaking work with colleagues at Stanford University on identifying risk factors, Spangler and her graduate students offer strategies for parents to help children develop a healthy body image.

An important first step in preventing eating disorders, says Spangler, is for parents to understand and counteract the pervasive message advanced by the diet industry. “It says that if you’re a female and you restrict and restrict and restrict or if you’re a male and you take supplements and work out, then you can have the body of your dreams.” While these approaches may work for a time, she says, they can’t be sustained long-term. Because of genetics, physiology, and the limits of willpower, the body is modifiable only to a degree. Severely restricting eating, in fact, lowers the body’s metabolism and almost always leads to binge eating—which means weight gain later. By teaching children such facts from an early age, parents can help them think more clearly and realistically about how to treat their bodies.

“These body messages that you must be thin or muscular or perfectly sculpted are everywhere. It’s on TV, it’s on the radio, it’s on billboards—you cannot escape it.” –Diane Spangler

Parents can also teach their children to critique harmful media messages they get about the body. Parents should filter out as much as they can, says Spangler, but they’ll never be able to filter out all that is harmful. “The ambient culture is so pervasive and strong. These body messages that you must be thin or muscular or perfectly sculpted are everywhere. It’s on TV, it’s on the radio, it’s on billboards—you cannot escape it.” For example, says Spangler, you can inform your children that the images of models they see in magazines and television ads are not real but rather airbrushed and computer modified. Point out that the models are often unhealthy. “Most of the models have a Body Mass Index in an anorexic range, which means their bones are demineralizing and they’re losing heart volume, brain volume, and hair,” says Spangler. And you can explain that such models are setting themselves up for being overweight later, as those who severely restrict their eating nearly always develop binge-eating habits. Most who continue to severely restrict food develop anorexia, and many of them will die if they don’t receive treatment.

She cautions, however, that Primary lessons about the body being a gift from God don’t necessarily mean a child will think positively about her body on a day-to-day basis. Parents need to further help their children internalize this idea from an early age. One helpful technique is something Spangler calls “feature days.” She suggests you have your child focus on a body feature for a day and appreciate all the things it can do. “You might pick hands one day and talk about all the different things your hands can do. Maybe you squish Jell-O in your hands or play catch together.” The idea is to help the child think about her body in terms of its capacities rather than in terms of what it looks like. The next day, you might have a “feet appreciation evening” and go for a hike together.

Another strategy is to have children think about someone they really care about and feel close to, then ask, “What is it about that person you most value?” Spangler says she has yet to have someone say, “How he looks.” Point out that appearance has little to do with the person’s character or value as a person. This discussion will bolster children’s beliefs that value people—and themselves—for admirable character traits rather than for physical appearance.

As you help your children develop these foundational beliefs, it’s important to get a handle on what they already believe about their bodies. To do this, Spangler says, ask your child what she truly thinks and feels about her body. “You would tailor it differently for different ages, but you might have a daughter look in the mirror and say to her, ‘Tell me what you see. Describe yourself to me.’” Most children above age 12 or so, and especially girls, will express critical thoughts, says Spangler.

“So when your daughter says, ‘My hips are fat,’ or, ‘My thighs are too big,’ you know what she really thinks.” Spangler says it might take some persistence to obtain this insight. “They often won’t tell you. You’ll think they’re fine and they’re really not.” With solid information, you can open up a dialogue that will help your child avoid or improve body-image problems.

If children build a foundation of healthy beliefs about their body, Spangler says, teaching them how to eat responsibly becomes much easier. A first step is to help children tune in to their body’s hunger cues. “We have so many external cues to eat that people have really lost the ability to notice when their body is truly hungry,” says Spangler. Parents can teach their children to rate their hunger before they eat by asking, “On a scale
of 1 to 10, how hungry are you?” Doing this helps children understand the difference between physiological hunger and psychological hunger, such as feeling sad or bored.

Spangler says this is a bit tricky, since it’s sometimes appropriate to use food to celebrate or as a comfort. “What matters is being aware that that’s what you’re doing,” she says. “On occasion you make that deliberate decision: ‘I’m not that physiologically hungry, but I’m at this party and that cake looks really good and I’d like to try it.’ So then you take three bites instead of eating the whole thing. The emphasis is on being mindful and making choices and being aware of what your body is telling you.”

Spangler says she helps her own children respond to hunger cues. When they want to stop eating and ask to be excused, she asks them, “How hungry are you? What does your tummy feel like?”

“My 2-year-old says to us now, ‘I full. I done.’ Little kids are very good at eating with response to hunger cues. They will stop eating when they’re full.”

Parents can also teach their children “mindful eating”—paying close attention to the actual experience of eating so that they feel more satisfied with less food. For example, parents can have their children take one bite of something and hold it in their mouth and chew it slowly and pay complete attention to it. “It’s really fun, and most people will say after that, ‘I don’t think I’ve ever really tasted this food before.’ You can’t eat this way all the time, but if you practice, it really affects your day-to-day eating.”

Last, Spangler encourages parents not to forbid any foods, as forbidden foods are what people tend to binge on. Instead, she says, encourage moderation and reasonable portions. “God gave us all this wonderful food to enjoy, and we should enjoy it!”

For these strategies to make a difference in children’s health and body image, Spangler says parents have to be deliberate and consistent. “If as a family you’re really serious about these issues, you can’t just do these things once in a while and leave them to chance.” Obesity and anorexia, as well as less-severe problems in between those extremes, can seriously damage a person’s life, while having healthy beliefs and behaviors about the body can powerfully enhance it.

Spangler says she is driven by a desire to help people not fall short of their potential because of body image problems. “They miss out on awesome relationships and they miss out on the development of their talents because they’re so preoccupied with either their appearance or with food. What gives me hope is it’s so changeable. I’ve seen it over and over again, people giving up destructive ways of believing. It reminds me of the scripture ‘The truth shall make you free.’ You’re free of vanity. You’re free of criticisms of yourself and others. You appreciate your body more so you’re a better steward of it.”

• Teach children that 95 percent of reducing diets fail within one year and 99 percent within five years.

• Don’t talk about your own body in disparaging ways.

• Monitor your children’s comments about other people’s bodies to give you clues about what they’re thinking about their own bodies.

• Teach children how to say no to food without creating forbidden foods or a general attitude of restriction.

• Be aware that girls are particularly susceptible to body image and eating problems but boys are becoming more susceptible.

• Remember that every body is unique. Help your children value that uniqueness and develop healthy beliefs and behaviors to meet their specific needs.

Sue Bergin is a hospice chaplain and a writer and editor in Orem, Utah.

Of Bodies and Brains

These researchers were looking for a reference point for eating disorders. See what they found.

An oral history project unites families and uncovers the past by helping Cambodians record and document their stories.