Of Bodies and Brains 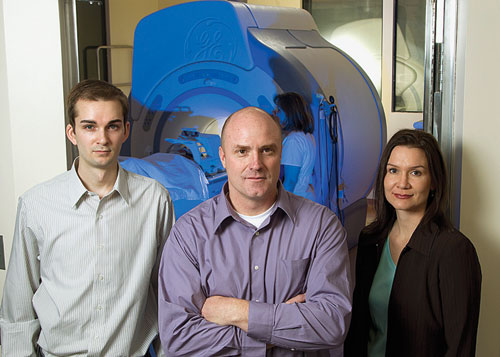 Researchers (from left) Tyler Owens, Mark Allen, and Diane Spangler were looking for a reference point for eating disorders.

How concerned are you about your body image? Your answer might be closer to “not at all” than “very much,” but a recent BYU study published in the journal Personality and Individual Differences suggests that if you are a woman, your brain might show otherwise.

Psychology assistant professor Mark D. Allen and associate professor Diane L. Spangler began their study with MRI scans of bulimic women. While being scanned, the women viewed images of strangers of all body types, imagining that someone was saying, “Your body looks like this.” When they viewed overweight women, their MRIs lit up in areas of the brain associated with self-evaluation and negative emotional processing.

Intrigued by these patterns, the researchers decided to compare the women with bulimia to a group of women without eating disorders. Participants completed a questionnaire about their body satisfaction, fear of weight gain, eating behaviors, and self-judgment about their body weight or shape. On a scale measuring their concern about their body image, from 0 (not at all) to 6 (very much), the women without eating disorders averaged 0.1—“extremely low,” says Allen. Yet, when these women viewed images of overweight strangers, their MRIs were similar to those of the bulimic women. 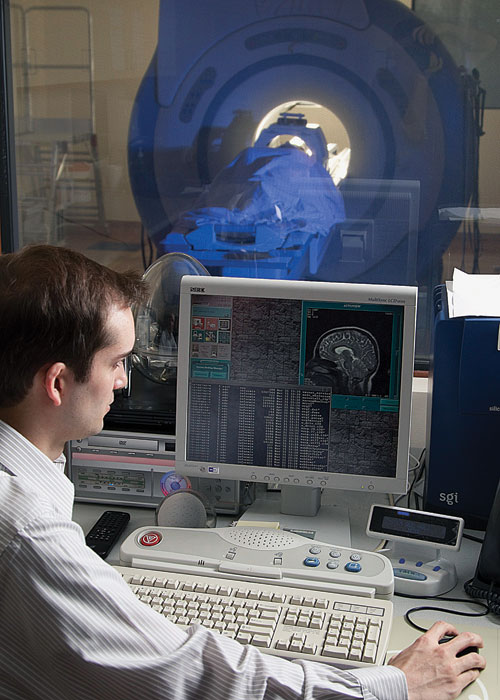 At this point, Tyler E. Owens (BS ’04), a grad student assisting the researchers, suggested studying men as well. While men tested similarly to healthy women on the body-image questionnaire, their MRIs were completely different. “When viewing overweight men, men do not appear to respond with any sense that it is relevant to them personally,” says Spangler.

This may seem unsurprising: most people don’t need a study to confirm that even the healthiest women are more concerned about being overweight than men. What is interesting to the researchers is that these women seem unaware of this subconscious bias. In fact, many said they were bored or uninterested while viewing the images, despite the story their brain scans revealed.

“Sometimes headlines can make scientific findings sound really trite,” says Allen. “‘Women Don’t Want to Get Fat.’ Well, duh!” Allen explains the significance this way: “Studies on eating disorders invariably select a group of women without eating disorders as control subjects. One thing our study shows is that we cannot assume that such women are completely free of body-image issues. That is, there may be no such thing as a control group.”

Spangler adds, “I think this study shows just how pervasive and penetrating the thin ideal for women has become. Many women learn that bodily appearance and thinness constitute what is important about them, and their brains reflect that.”

Owens says that just being aware of the issue is helpful, for women and men. Men can learn to be more understanding of the self-conscious thoughts of women, and women can learn to check their self-judgments: “By understanding these vulnerabilities, people may take action to replace sources of negative thinking with messages that foster positive self-image.”

To help your child on the outside, start on the inside.

This Hebrew primer will unlock the meaning in some common Biblical terms and enrich your scripture study.