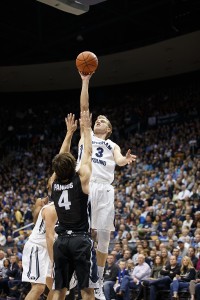 With a combination of deadly mid-range jumpers and free-throw proficiency, Tyler M. Haws (’15) got to scoring right away as a freshman in 2009–10. Four seasons later, on Feb. 26, the sharp-shooter scored his 2,600th point, passing former teammate Jimmer T. Fredette (’11) to become BYU’s all-time scoring leader. But that was just one of his no. 1s:

Changes Made in Men’s Basketball

Read about the latest in BYU sports.