Snoozing peacefully in his sleeping bag at the base of Silver Pass on the Sierra Nevada’s John Muir Trail (JMT), Andrew S. Bentz (’16) woke with a start. It was 6 a.m.—not usually considered “sleeping in”—but Bentz was attempting to set the record for the unsupported (read: unassisted) fastest known time on the JMT. And now, at the start of his third day on the trail, he was three hours behind.

“When I woke up I was like, ‘I want to quit.’ I thought that I had to get off trail because I was just too exhausted.” But with some quick calculating, Bentz figured he could still complete the 223-mile trail in time to beat the previous unsupported record of 3 days, 14 hours, 13 minutes.

Bentz is no stranger to endurance feats—a week before his JMT record attempt, he finished the Pacific Crest Trail (PCT), walking from Mexico to Canada in 93 days. The average hiker takes four to five months. “[I liked the] feeling that I could walk forever and never stop,” Bentz says. On that trip he decided it was time to take on a dream he’d been chasing since high school: the JMT unsupported record. He designed a custom, ultra-light pack for the attempt, sewing it himself upon his return from the PCT. With a pack weighing just over 20 pounds when loaded, he began the JMT at Whitney Portal on Aug. 26, 2014. 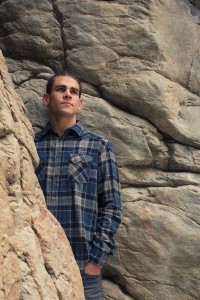 In his first 20 hours, Bentz maintained his target pace of 3 miles per hour as he conquered countless switchbacks and mountain passes, including Mount Whitney—the tallest mountain in the contiguous United States. “I was so satisfied with the way everything was working—my pack, my shoes, my own body, everything,” says Bentz. After just a few hours of sleep, Bentz was back on the trail for another 20 hours and 63 miles of hiking.

Though exhausted, he was buoyed by encounters with and high-fives from other hikers, as well as a few pep talks from his parents via cell phone. Still, Bentz found himself occasionally questioning the attempt. Blisters, a throbbing knee, and a stomach upset by a diet of energy and candy bars and dissolved maltodextrin begged him to stop. But Bentz persevered. “You just have to tell yourself that you’re fine,” he says. “You don’t need sleep. . . . Keep going. It’ll be over soon.”

He made it to Happy Isles in Yosemite National Park just before 11 a.m. on day four, with a record-breaking time of 3 days, 10 hours, 59 minutes and 40 seconds, now recorded on the FastestKnownTime.proboards.com website. By the end of his trek, Bentz had traversed approximately 84,000 feet of elevation change.

Leor Pantilat, who captured the supported (he had a team pacing him and bringing him supplies) fastest known time this summer—just three and a half hours faster than Bentz—called Bentz’s feat “the JMT performance of the year.”

Adds Scott A. Bentz (BA ’86), noting his son’s determination, “[Andrew] set a goal. And I think that goal pushed him through to finish.”

Love of the Mountain