Love of the Mountain 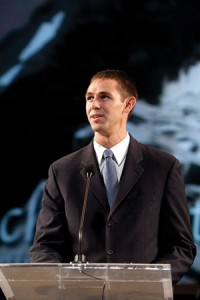 The river thundered through the slot canyon it had coauthored with the merciless millennia. We had spent the day in it—navigating 15 miles through the recently liquefied snow pack. My brother Jeff rested momentarily on the rock ahead, shaking his head in disbelief. “Sometimes you have to remind yourself to look around,” he grinned, scanning the cliff walls that surrounded us with 500 vertical feet of untamed majesty. “This is why we come.”

My body throbbed in exquisite exhaustion, but I smiled in agreement. Less than 48 hours earlier it had been my mind throbbing at the culmination of the semester’s numberless hours—pushing through my finals in the testing center. Focus, I had pled with myself then. And finish.

Now, as we considered the steep ascent out of the southern Utah gorge, my body tried to raise a similar plea. But Jeff’s words had resonated, and as I started my scramble out of the freezing current and up the sun-drenched rock, my mindset adjusted. Focus on the magnificence of this moment, I thought, and the finish line will take care of itself.

If such a mindset ever had a physical embodiment, his name was Eugene Roberts, the first athletic director at Brigham Young University. “I have been blessed with some real appreciations of beauty,” he once admitted. It was a blessing that manifested itself in his unique vision of the world. Roberts kept appropriate focus on the goals he had set—the mountains of life he hoped to summit. But he also fostered a distinct gift for living in the moment—an intimate passion for the journey.

“Practice laughing,” he once requested of his wife, Sytha, in a letter. He didn’t encourage just any type of laughing, but “real heart laughing.” Anticipating the time when they would reunite, Roberts rejoiced, “We can take our pleasure in the simple but real things. We can attend the ‘Y’ dances together, can take our brief automobile rides, can read good novels.” The couple was indeed known for cherishing the “simple but real things.” In later years they would often “sit for hours watching the setting sun play on Timpanogos.”

Roberts also cherished hard, honest effort. “Work is a God send,” he wrote. “It drains off all the possible evil and foolishness. The most unfortunate families in the world are those whose heads are idle.” The quality of his personal labors reflected this depth of feeling about them; consequently, the impact of his prolific career is still felt today at BYU and beyond. The power of his exceptional life and the lasting value of his contributions are a function of the dedication and happiness he poured into the moments that composed them. When he decided to give his time and energy to something, he gave his heart as well.

Most of all he cherished the outdoors. “I love Provo,” he once noted to his daughter. “Mountains, canyons, streams, lakes, trees.” Within the BYU community, he would often organize sunrise and sunset hikes, moonlight strolls to Maple Flat, or a “pilgrimage to Timpanogos.” These experiences left lasting impressions on the students and friends who were able to “trail along with Eugene.” They inherited his ability to recognize beauty and give thanks for it.

“Of all the gifts you’ve given me,” his daughter wrote him, “the love of beauty has been one of the most valued. How drab my life would be if I couldn’t respond with an inner-happiness to the wonders of nature around me—from the color of the flowers to the interesting figure of a bare tree with a thousand things outlined against a winter sky. It was a gift you gave me.”

It was a gift Roberts gave—and continues to give—to countless individuals. “Gaze into the infinite reaches of space each night,” reads his counsel. “Let your souls be gripped with awe.”

His perspective unfolded to me on an April evening years ago, as I conquered the final stretch of a desert trail. My lungs heaved in the ecstasy of oxygen and my legs ached in searing triumph. But as I turned to visually retrace the journey, I was stripped of both breath and pain. Red canyon cliffs twisted into the glistening distance, framing the cloud-strewn canvas on which God was painting sunset. I felt in that moment—in that singular instant—that happiness is more than checking off a box on the summit.

Seeing From Both Sides

Four months in Central Asia put Miles Hansen on a path that wasn't on his map.

Pause to Help and Lift a Brother

The commencement address of 2017: Some races are worth finishing together.