Seeing From Both Sides

Four months in Central Asia put Miles Hansen on a path that wasn't on his map. 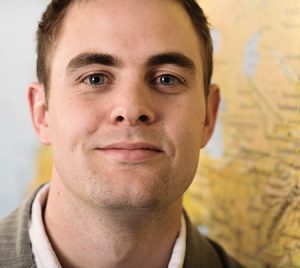 Raised minutes away from some of Utah’s best snow, Miles C. Hansen (’08) has been skiing the local powder since he was 6. During winter semester 2006, however, Hansen made his first runs of the season at Mountain Ski Base Karakol, high in the mountains of Kyrgyzstan.Hansen, an international studies major, never had plans to be in Kyrgyzstan, much less ski there. Originally, he had applied for an internship with the International Trade Center (ITC) in Geneva, Switzerland. But BYU’s Kennedy Center for International Studies called him back to ask if he’d apply for another ITC internship—one that had opened up in Kyrgyzstan.Hansen readily agreed. And then he went to locate Kyrgyzstan on a map.Months later, Hansen moved to Kyrgyzstan—which, by the way, is in Central Asia—to begin his internship. At the ITC regional office in Bishkek, Hansen made use of the Russian he learned on a mission to St. Petersburg as he translated documents into Russian and English. The documents pertained to the development of the fruit- and vegetable-processing industry in Central Asia, which the ITC is striving to bolster. “The economic incentive exists,”Hansen explains, “but the necessary infrastructure and expertise are lacking.”According to Hansen, the ITC’s project will not only boost Kyrgyzstan’s national economy but provide lower-income agrarian families with a viable livelihood. By the time his internship ended, Hansen had traveled through much of Kyrgyzstan and felt compelled to continue his exploration of the region. From Kyrgyzstan, he flew to neighboring Tajikistan, where he stayed for three weeks with friends, friends of friends, and their cousins-three-times-removed. Traveling alone in an unfamiliar place, Hansen interacted with people from every walk of life, an experience he says afforded him invaluable perspective.As he traveled, he was astounded by the generosity of the Tajikistani people. “The whole time I was in Tajikistan,”he says, “never once did I pay for food, and never once did I pay for lodging.”And whenever he offered to pay, he’d get the same response: “You are a guest in our country, and how we treat guests is how we treat God.”While lodging in Khorog, a small village high in the Pamir Mountains, Hansen was invited to attend a Muslim prayer meeting. He sat apart while his hosts performed their prayers and was then invited to join the group at the feet of the village spiritual leader, or caliph, who proceeded to teach his people—and Hansen.“I was taught about the importance of service, especially imparting what God has given me to my neighbor,”says Hansen. “I was taught about the importance of love. . . . The caliph said that if we will unconditionally love our enemies, then eventually our love will turn their hate to respect and then love in return.”The caliph’s sermon on charity and the genuine goodness of the Tajikistani people touched Hansen so deeply that, upon his return to BYU, he changed his academic emphasis to Middle Eastern studies. He is now taking his second year of Farsi, the language spoken in Tajikistan as well as Iran and several other countries. With his international experience, Hansen hopes eventually to work in government service. “I’d love to work for the state department and live abroad,”he says, “I want to work on strengthening ties between America and the Persian world. If you can see things from both sides, the solutions become more apparent.”

An alumna teaches high school at Rikers Island, one of the largest jail complexes in the world, with compassion.

BYU Dairy manager Karl B. Ritchie was faced with an 18,000-ton dung dilemma.