By Megan Vandre in the Fall 1999 Issue 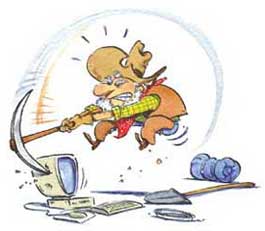 In their paper Thorley and McQueen show how the Foolish Four approach is based on data mining. They sarcastically tweak the data even further to make their version show better results than Motley Fool’s did.

“The Fractured Four (Thorley and McQueen’s version) is so obviously the product of mining that we believe it drives home the point,” the article reads. “So-called successful investment strategies, even those that have been successful for 24 years, may turn out to be fool’s gold, not a golden chalice.”

The fact is, no one has found a way to consistently beat the market, the researchers say. No strategy can always be right–an element of risk is inherent in the stock market. However, some strategies offer good advice. How then do you tell which strategies are good and which are faulty? McQueen advises investors to be skeptical about trading rules, even those that have been successful for several years. He further advises that trading rules be tested out-of-sample and checked against financial theory.

Thorley agrees but also says the strategists’ tone can be a tip off: “They’ll paint the picture that they’re outsiders, that the Wall Street crowd is protecting their secret way to make a lot of money, and that they as outsiders are willing to share it with everybody.” Like McQueen, he advises being wary of all published strategies.

“It’s just not likely that there is such a scheme that would work, and even if there were, why would you and I be reading about it?” Thorley asks. “If it works, why are people writing books about it as opposed to just doing it themselves?”
Another problem with many trading strategies, Thorley says, is that they advocate frequent trades. He and professor Meir Statman of Santa Clara University have completed an academic study that finds the overall amount of trading is directly related to how well the market has performed. Since the market has done well recently, Thorley says, people become overconfident in their trading ability and trade more frequently. Overconfidence can be linked to the trend of day trading on the Internet, where people buy and sell stocks the same day. With frequent trades, day traders’ money gets eaten up in transaction costs and the slightly higher online stock prices (bad executions).

That’s why Thorley, whose views have recently been cited in The Wall Street Journal, says any strategy that advocates frequent trades should be avoided. Such trades become addicting, and the traders begin to think their success results from their trading frequency; in an attempt to get rich quick, they ignore the proven principle of holding stocks for a long time. Thus, Thorley says, many people who made money quickly in the recent bull market attribute their success to their own trading prowess.

“There’s an old statement on Wall Street that says, ‘Don’t confuse brains with a bull market,'” he explains. “Some people now consider themselves stock market experts because they made 20 percent return on their stocks the prior year, when in fact everybody made 20 percent, and the market as a whole went up 25 percent.”

So do you need to head for the hills (or the bookstore) in search of a treasure map to get rich? Thorley says no. And both he and McQueen offer simple advice: “Buy and hold stocks if you have a long investment horizon, and take advantage of tax-favored investment plans, such as 401Ks, regular IRAs, or ROTH IRAs,” McQueen says. Thorley adds, “We know how to do well in the stock market. You buy in a well-diversified mutual fund, and you sit on it for 20 years.”

This BYU student got a shot with the Real Oviedo soccer team in the Spanish pro-soccer league.

BYU researchers have traveled across the globe to train engineers on the software they created to model water features.