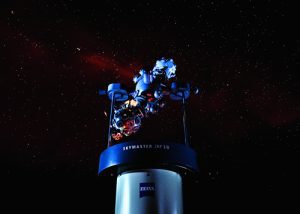 The planetarium’s projector can show the positions of stars and planets as seen from any earthly location at any epoch in time. Photo by Mark Philbrick.

With a specialized 3-D projector and state-of-the-art acoustics, Physics and Astronomy Department officials unveiled the completely rebuilt BYU planetarium in March.Designed not only for public demonstrations but also as a teaching facility, the planetarium includes special features to reduce echoes inherent in a dome, which traditionally make lecturing difficult. It also seats 119, up from the original 40, and can project all the stars visible to the naked eye, in addition to others that require binoculars to see outside.“This is a beautiful theater constructed in such a way to optimize the sound and visual effect of looking at the sky while we are teaching,” explained J. Ward Moody (BS ’80), professor of physics and astronomy.The astronomers, who lecture comfortably in the planetarium, owe that functionality to acoustic experts in the physics department. Timothy W. Leishman (BA ’70), an assistant professor of physics, described the challenges of merging two things that don’t usually go well together—a dome and sound.“We used a new type of treatment on the dome. It looks like plaster, but it has very fine pores. A good portion of the sound works itself into pores and gets absorbed by insulation. It’s also a very nice projection surface.”Leishman said the remodeled BYU planetarium is the only one he is aware of with this acoustic treatment.For a complete schedule visit planetarium.byu.edu.

Join me on a quick-paced, mind-swinging jog-walk through a selection of recent books written by alumni of BYU.

Mothers May Shut Some Fathers Out of Family Work

Study shows that conceptualized dimensions of maternal gatekeeping tend to be a package deal.