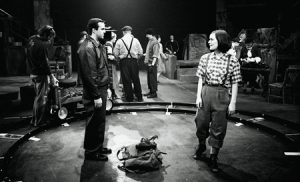 Student actors perform a scene from Berlin. The filmed production will air on BYU Television this fall.

The tenor voice of Kevin Goertzen (’08) rings through the misty, dark set on an LDS Motion Picture Studio lot, presently transformed into a divided Berlin, circa 1950. “Liberty in each and every way. Equality for one and all,” sings his character, General Vladimir Sokolovsky. The scene closes as Goertzen sinks to the floor, the ghost of Sokolovsky’s wife leaving him alone again. “Cut!” calls the director, theatre and media arts (TMA) professor Timothy A. Threlfall (’97), from the shadows. Only one and a half days to finish filming Berlin, a musical about the Berlin airlift.

This is no ordinary musical performance—it’s “black box cinema,” as Berlin playwright and Broadway producer Erik L. Orton (BA ’98) calls it, which blends stage performance with the intimate close-ups and dynamic camera angles of film. The production is a first-of-its-kind pilot project involving the TMA Department, the School of Music, BYU Broadcasting, and the LDS Motion Picture Studios—“departments that are sometimes competitive, who normally don’t collaborate without a hiccup,” remarks Orton.

Orton penned the musical as a BYU student and has now returned to give theater students a feel for the camera. “It takes a lot of time, but it still gives you that high that you get when you’re on the stage,” says senior actress Emily Blewitt (’08).

August Eriksmoen, music director for the upcoming Broadway revival of Godspell, conducted student and faculty musicians performing music for Berlin and was impressed by BYU’s talent. “It ranged from a typical student level to ‘Wow, I can’t wait to hear that guy in five years,’” says Eriksmoen.

As students interacted with professionals and others from across campus, they say they gained experience unlike any they would get in the classroom. “I’ve been at BYU 12 years,” says Threlfall, “and this is the most comprehensive educational experience I’ve been able to facilitate for students.”

BYU students performed Berlin 12 times in front of professional- and student-operated cameras to create the material for the film, which will air on BYU Television in fall 2008.