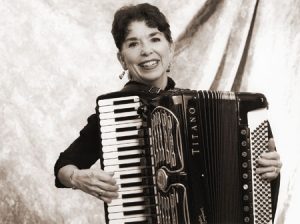 Accordion virtuosa Janet Tod used her taken tot make friends for BYU. After taking a break to focus on her family, she returned to professional performing in 2001.

Short in height, large in talent, 4’11” accordion player Janet Cutrer Todd (’64) was on the fast track to the professional music circuit when she decided to forgo a chance to play in Las Vegas and enroll at BYU.

“I thought coming to BYU would close a lot of doors,” Todd says. “But it really opened 10 times the number of doors for me.”

When she arrived at BYU, Todd was met with open arms by Janie Thompson (BA ’43), creative director for the Program Bureau, BYU’s touring student performing group. Todd joined the group and played her accordion around the United States, Europe, the Orient, and the Middle East.

“I was just bowled over with her talent, and she was a little showman to go along with it,” says Thompson. “Her instrument seemed almost bigger than she was, but she could definitely handle it.”

Todd’s musical gift was apparent from an early age. When she was 12, Todd performed at a Jewish bar mitzvah. The rabbi placed her on a table and told her, “We want to dance.” After listening to the rabbi sing the celebratory Jewish song “Hava Nagila,” Todd played the tune by ear on her accordion as the guests danced around her.

During a Program Bureau tour of the Middle East in 1965, Todd’s attuned ear helped the students spread goodwill to Middle Eastern countries. In Ceylon, now known as Sri Lanka, Todd asked a worker cutting bushes to sing her his favorite traditional song. She remembered the tune and performed it that night to the delight of an audience of 10,000. Because of the audience’s overwhelming response, Todd was asked to continue learning and playing traditional music throughout the tour.

“In every country she would get someone to sing a folk song from the country,” Thompson says. “Sometimes she would get there in the morning and perform the song that night. And she was the biggest hit. The people just adored her.”

Todd’s husband, Jay, wrote press stories for the tour and went on to become the first managing editor for the Ensign magazine. With Jay’s career kicking off, Todd was ready to settle down and be a wife and mother.

“I had never even cooked a full meal before I was married,” Todd says. “But you can always learn. I knew how to organize my time and reach a goal, and I was ready to start this chapter of my life.”

Five children later, Todd found a way to incorporate performing into this new phase of life. She organized a children’s performing group called The Backyard Gang to give local children a chance to be in front of a crowd and improve their self-confidence. In a matter of months, the group grew from 12 kids entertaining at local church functions to 52 children performing for the Utah governor and at BYU Education Week.

Because of her commitment to her family, there were periods when Todd took a break from intense music practice.

“I got zest out of being with my children and their school and just being a mother,” Todd says. “I was still doing music as far as recording sessions and casual things, but I didn’t live to practice every day.”

In 2001, after not performing professionally for many years, Todd accepted an invitation to perform for Salt Lake City’s New Year’s Eve celebration, First Night. This performance required her to renew her intensive practice regimen, and she hasn’t stopped since.

Although it takes Todd’s arthritic fingers a little longer to warm up these days, audiences can see the 68-year-old performing close to her home in Holladay, Utah, or around the country. She performed for Russian athletes at the 2002 Olympics and with the Utah Symphony in the The Lord of the Rings Symphony in 2004.

Along with starting the Salt Lake City Accordion Club and recording a CD, Todd has been busy performing and competing at accordion festivals. In 2005 she won both the jazz and duet championships at the Kimberley International Old Time Accordion Championships in Canada.

Almost anyone would be cool behind the wheel of Electric Blue.