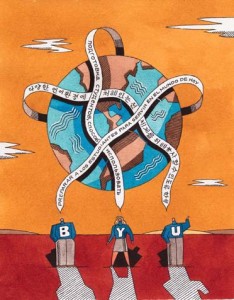 WORDS HOLD POWER. Even a short phrase written in haste or a hushed sentence spoken in ignorance can have far-reaching repercussions, both in the personal and public arenas. Throw into the mix problems of foreign language and translation, and the importance of language savvy ratchets up. Add in an age where nuance can make or break billion-dollar business deals and the semantics of world leaders can be broadcast throughout the globe within seconds and the gravity of language skill leaps exponentially.The demands of globalization thus place a premium on knowledge of language and cultures. BYU stands as one of the premier institutions in the world for gaining this knowledge, teaching 35 languages, providing a host of opportunities for achieving fluency, sending some 1,500 students abroad each year, and enrolling students in language study at a rate three times the national average—more than 25 percent of the student body compared to 8 percent nationally.“The future of our culture, society, and church hangs on cross-cultural understanding, which hangs on language. Language is the core and vehicle of culture,” says Melvin J. Luthy, linguistics professor and director of BYU‘s Center for Language Studies.SECURING THE NATIONSeveral federal facilities receive public funding and are charged with ensuring the nation has enough foreign language speakers to perform national security functions such as communication with allies, translation, and interrogation. They include the Defense Language Institute Foreign Language Center (DLI) in Monterey, Calif., and the Foreign Service Institute School for Language Studies, in Arlington, Va. BYU is well-known at both institutions as a source for top-notch foreign language speakers.“With so many returned missionaries among our students and faculty at BYU, we’re sitting on a gold mine,” says Luthy.According to Richard D. Brecht, director of the National Foreign Language Center (NFLC) based at the University of Maryland, the demand for fluent or near-fluent speakers in many languages has exploded, but the supply is woefully inadequate.“The need for linguistically competent professionals has never been greater; the lack of such professionals looms as a threat to the nation’s security,” writes Brecht and coauthor William P. Rivers in an article on the NFLC Web site.The shrinking supply prompted the NFLC, as part of a project funded by the National Security Education Program, to invite BYU and five other universities to conduct a “capacity study” outlining what it would take for the schools to produce superb language speakers in two of the five languages considered critical (and difficult to learn): Russian, Chinese, Korean, Arabic, and Japanese. BYU‘s study showed its exceptional capacity in three languages: Russian, Chinese, and Japanese.The NFLC intends to create “flagship” institutions for the critical languages, and BYU hopes to be one of them, says Luthy. Funding (pending at press time) from the government would cover programs, faculty, and scholarships for students.“When Congress provides the money, there will be a national competition for it. It’s hard to imagine BYU not being totally competitive,” says Brecht. “BYU is unique in the country in the depth of experience that its undergraduates and graduates have in living abroad.”The government needs speakers at level 3 on a scale of 0 to 5, and very few universities at this time are capable of turning out 3s, explains Brecht. “As a rule they’re turning out 2s. To turn out 3s, you can’t start from scratch. You need undergraduates who already have strong language abilities.”The DLI offers a similar appraisal of BYU graduates.“We hire a lot of BYU graduate students as teachers. They have the academic preparation that we are looking for—a combination of native or near-native language skills and graduate work in foreign language education and applied linguistics,” says DLI chancellor Ray T. Clifford, ’68, who earned his bachelor’s and master’s degrees in German at BYU.An objective measure of language studies at BYU comes from the Integrated Postsecondary Education Data System (IPEDS), which collects data from U.S. colleges and universities.“The IPEDS data show that BYU stands out nationally,” says Clifford. “BYU‘s Russian program is about four times larger than the next university in terms of graduating language majors per yea
r. Even in a common language like Spanish, BYU is in the top three with the University of Texas at Austin and the University of California, Santa Barbara.” 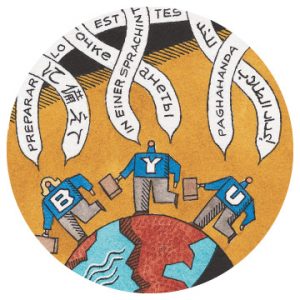 GLOBAL CONTRIBUTIONSAlumni who have developed their language skills at BYU pepper the workplace landscape, from Fortune 500 companies to small dot-coms seeking to penetrate the worldwide market. Many work in important environs like the White House, U.S. embassies, and other government agencies or offices.A 1995 BYU graduate, an American of Pakistani, Arab, Baluchi, and Norwegian descent, minored in Arabic at BYU and recently was called up to serve in the war on terrorism as an Arabic linguist with the U.S. Naval Reserve. The vice president for global business development of an online investment corporation, he became fluent through taking BYU courses, living in the BYU Arabic foreign language house, studying in the intensive language program at BYU‘s Jerusalem Center, and completing a one-year language Fulbright Fellowship in Jordan.“I’ve met a lot of people who went through Arabic language programs at other universities, and BYU seems to have one of the top programs as far as getting people to really speak Arabic well,” he says.Marianela Navarro Serabian, ’73, translates foreign language materials for a government agency. A native of Cuba, she learned French, Portuguese, and German at BYU. “My preparation at BYU was excellent,” says Serabian. “Everyone I speak with here is very impressed with the caliber of language graduates BYU produces.”Sharon Schwarz, a lead recruiter for one of the government’s most important language employers, agrees. “The BYU experience offers students the right opportunities to make them strong language candidates for our agency,” says Schwarz, who recruits at BYU twice a year. “They get formal language training and/or language training at the MTC and immersion experience by residing in a language house or with the mission experience.”Jonathan R. Winward, ’99, served a Church mission in Russia, then honed his Russian language skills at BYU. He is now consular assistant at the U.S. embassy in Moscow.“I’m the youngest person in our main office and the only one who didn’t acquire language skills either through the military or from being a native Russian speaker—which I attribute in great part to the excellent instruction I received at BYU,” Winward says.BYU’S INTERNATIONAL FLAIRMore than 70 percent of BYU students report competence in at least one second language, and a high percentage have experience abroad. That BYU, widely perceived as homogeneous, should have such an international flair may come as a surprise to some. The large number of missionaries who have returned from all over the world to study at BYU accounts for a large part of this global consciousness, but not all. And the interest in things international is growing.The David M. Kennedy Center for International Studies reports that in 2000 the university sent out 1,967 students for international experiences, more than any other university in the United States. Although the temporary closure of the Jerusalem Center reduced the number for 2001, BYU‘s cadre of globe-trotting students is still almost double the number who spent time abroad just three years ago. Opportunities include Study Abroad, volunteer expeditions, internships, and field studies in such far-flung countries as Ukraine, Guatemala, Uganda, India, and Tanzania.“I’ve taught at three other universities, and you just don’t get undergraduate students at other institutions who have as much in-country experience, who have absorbed both the language and the culture,” says Van C. Gessel, dean of the College of Humanities and professor of Japanese.The advanced skills of so many BYU students makes teaching more enjoyable, says Gessel, who has taught at Columbia University, the University of Notre Dame, and the University of California, Berkeley. He’s able to give advanced undergraduate students reading material in Japanese that he would have to hold back for graduate students at most other institutions. “When I was a graduate student at Columbia, we had a fourth-year conversation class in Japanese, but only two of us in the class of 10 could actually talk about the material. Here all of our students are capable of conducting conversations in the language.”With so many students having experience abroad and proficiency in a second language, the entire campus is enriched. In addition, students are more prepared as they graduate and scatter throughout the world. The ramifications of such preparation—or lack thereof—are pivotal, especially in light of current world events, says Luthy.“As an American people and as a church, we have to think internationally, multilingually, and multiculturally. It can mean our very lives.”

Sue Bergin is a writer and editor in American Fork, Utah.

BYU No. 3 for Foreign-Language Degrees

BYU ranks no. 3 in producing foreign-language degrees with no. 1 rankings in Russian, Portuguese and Arabic.