Although it might be difficult to feel at home when nobody speaks your language, about 150 BYU students voluntarily face this challenge every year when they enter the Foreign Language Student Residence (FLSR). In a large building across the street from the Missionary Training Center, nontraditional language study takes place daily as these students live, cook, and study together, without a word of English.

The Foreign Language Student Residence holds about nine language groups, or “houses,” per semester. This past school year students studied in Arabic, Chinese, French, German, Italian, Japanese, Portuguese, Russian, and Spanish. In the past the complex has also offered American Sign Language, Cantonese, Cebuano, Tagalog, and Vietnamese. Students cook and eat five dinners a week with fellow house members. They organize family home evening, Sunday School, and other activities in their target language. A native speaker in every apartment ensures that questions find answers and students improve their fluency. Apartments come with a TV, but only target-language programs are allowed. A monthly dinner for the whole complex, sponsored by one of the houses, introduces the foods and cultures associated with different languages to the other students.

“The greatest value of the FLSR is having native roommates so we can learn, not only modern language, but also modern culture.” –Andrew Davis

The variety of cultural experiences available is attested to by Brooke M. Wright, ’04, who has lived in both the German and Chinese houses. “Aside from the great benefits of studying the language,” Wright says, “living at the FLSR> provides an opportunity to spend time with people with unique interests. Their experiences, dedication, and adventures stimulate your own.” Andrew J. Davis, ’05, a former French House resident, says, “The greatest value of the FLSR is having native roommates so we can learn, not only modern language, but also modern culture.” 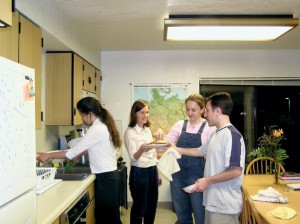 Perhaps the most intriguing aspect of the FLSR is the readiness of many students to switch languages. A glance down the ward directory reveals that, while many of the students are returned missionaries, many are not studying the language they spoke on their mission, and others (whether returned missionaries or not) are living in their second or third house. Regardless of the house, students learn things they wouldn’t learn in class. “I can talk all about economic development and international relations, but classes don’t usually teach you how to say that you’re out of toilet paper or that your boyfriend dumped you,” Wright says.

The program began with the Russian House in the 1970s, and the present facilities began operation in 1991. Today, this language program is an important part of BYU’s excellent foreign-language education. Director N. Jeannie Sutton Welch, ’70, says, “Other universities have language houses, but I do not know of a program with as many languages as ours, nor any that have the native-to-resident ratio that we do. Our program and building is the envy of many of my colleagues at other universities.”

Amazon picks BYU to up Alexa’s chat game. $1.5 million is on the line if they can build a better bot.