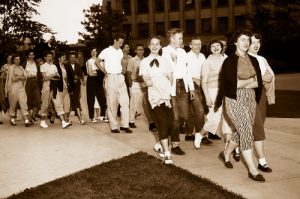 During the ’50s and ’60s, BYU coeds could wear slacks only for th eprecommencement jaunt around campus, as shown here in 1954. Dress and grooming standards continue to be a part of BYU’s distinctive culture.