By Michael D. Smart and Erick Carlson in the Fall 1999 Issue

By Michael Smart and Erick Carlson

European tourists stopped short in the entry to the interior chamber of the Urn Tomb in the ancient Nabatean city of Petra, Jordan. Having come to view the city’s famed building facades carved out of red sandstone cliffs, the tourists were surprised to find 40-plus young adults lining the 50-feet by 60-feet stone room.

But it wasn’t the sight of clean-cut Americans in the exotic Middle-Eastern locale that most surprised the visitors–it was the music that came from their mouths and filled the massive room. WhenBYU’s University Singers softly sang the last notes of Eric Whitacre’s “Water Night,” the listening tourists and local merchants remained captivated as the notes continued to reverberate, then trickled from the chamber into the desert sunlight.

The lucky tourists were only a few of the thousands who heard the Singers on their five-week tour of England, Jordan, Israel, and New York City, singing in venues as varied as London’s Hyde ParkLDS Chapel, the BYU Jerusalem Center, and New York’s famed Carnegie Hall.

The 42-member choir is BYU’s elite choral group. Organized in 1984 by conductor Ronald Staheli, the ensemble has become what Maurice Casey, past president of the American Choral Directors Association, calls “one of the premier choral organizations in the United States.” Having previously toured in Europe, Russia, the Baltic States, Australia, and New Zealand, the group’s latest honor was an invitation to end this year’s tour with their first-ever performance in Carnegie Hall. 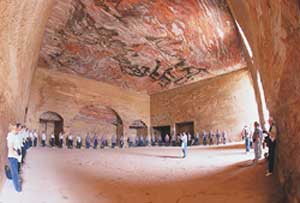 Staheli described the hallowed hall, which has hosted all the world’s great orchestras and vocal soloists over the past century, as “a jewel–it’s without a doubt the best place for music I’ve ever heard.” The June 8 performance was attended by more than 2,000 people, including several ambassadors to the United Nations and many BYU alumni and friends. Also present were the composers of three of the major pieces in the program, two of which were commissioned especially for the Singers by the Barlow Endowment.

“Our performance in Carnegie Hall was the best we’ve ever given,” Staheli says. “The wonderful acoustics of the hall made the performance that much more effortless.”

After the show, Singers crammed alongside family and BYU alumni in the Carnegie Deli, across 7th Avenue from the hall, to celebrate the culmination of their tour. Among them were Alan and Jill Winters from Lindon, Utah, who met and married while performing with the choir.

Alan, former president of the Singers, suggests that unity is one thing that makes the choir successful. “Dr. Staheli firmly believes that a choir unified in spirit makes the most beautiful music, and that’s what he strives for.”

The Singers develop unity in part through intense daily rehearsals. Jill, former accompanist for the choir, remembers this all-encompassing commitment. “When you’re in Singers you have to sacrifice. You sacrifice so much time; you sacrifice so much pride. But it is a sacrifice that everyone willingly gives.”

And the fruits of that sacrifice were evident on the 1999 tour. “In our 15 years we’ve never been so successful in meeting the goals of BYU and the Church, as well as providing good music, as we were on this tour,” Staheli said.

Some of the students’ most memorable moments came when their music touched people from other cultures. Baritone David M. Thomas, who sang the solo in the Singers’ rendition of the British folk tune “Danny Boy,” had special experiences on the England leg of the trip. “That song has a lot of meaning to people all over the British isles. It’s a tender experience for me every time we sing it,” said Thomas, a junior from Spanish Fork, Utah. “People came up and told us, ‘I just sent my son off on a mission and his name’s Danny, and I cried through the whole song.'”

Similar experiences happened in every country the Singers visited. After several performances in Jordan’s capital city of Amman, the singers visited a group of LDS Church members there. One who smiled widely when the Singers began singing Arab folk songs was Sima Nissan. She and her family joined the Church after moving from Baghdad, Iraq, where they endured Gulf War bombings.

“We are very grateful for the Singers’ visit,” Nissan said. “The members here are excited to meet Church members from America and that they took the time to sing for us.”

In Jerusalem the Singers brought about a different kind of multicultural event. After a formal concert at the BYU Jerusalem Center for Near Eastern Studies, Jews and Arabs alike gushed praise. “Music touches everyone,” said Adi Alter, a student at the nearby Hebrew University. “People appreciate the sanctity of any religious music.”

A few rows behind him sat Khaled Manasra of Hebron, his head bobbing during the Palestinian folk song. “I didn’t feel that I was on earth,” Manasra said. “I thought, ‘This music is from heaven.'”

Sugar, Spice, and a Touch of Vice

A new BYU study finds that even in preschool "queen bees" will spread malicious rumors.