Teaching life skills through training in the performing arts to impoverished youth worldwide; breaking the cycle of poverty by inspiring change from within. 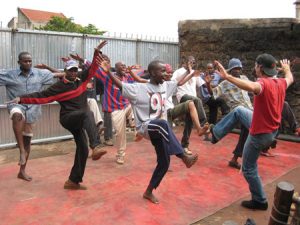 BYU alumnus and Broadway singer, dancer, and actor Shaun Parry (right) has taken his talents to the developing world as a way to teach life skills to underprivileged and troubled youth.

In Jerome Robbins’ ballet Afternoon of a Faun, two dancers—a boy and a girl coolly cloistered in the dance studio—fail to connect, mesmerized as they are by their own reflections in the mirror. There’s something about staring at oneself in a studio mirror for hours a day that can cause a person to forget that other people, other realities exist.

Broadway singer, actor, and dancer Shaun R. Parry (BFA ’95) is breaking through that mirror. A music dance theatre major at BYU, Parry toured with the Young Ambassadors. Shortly after graduation he moved to New York City, where he danced for New York Theatre Ballet and appeared in Broadway shows, Off-Broadway shows, national and international Broadway tours, the Metropolitan Opera world premiere production of The First Emperor with PlÃ¡cido Domingo, and more. All this led to a growing sense that he needed to do something more than just the next show.

“Ever since I was 10 years old I’ve asked myself, ‘When you’re gone, what will be the mark you leave on the world?’” Parry says. In late 2004 a chance meeting with a dancer from Peru brought an invitation to teach classes at her Lima studio the following year. Three weeks turned into three months as the two dancers worked with a bunch of hungry kids from a Lima slum—hungry for bread, but even more hungry for direction, discipline, and self-confidence.

As the students progressed in their dance classes, Parry noticed that many were also finding jobs and returning to school. A light went on: “This needs to happen all over the world,” he thought. In 2007 Parry established Promethean Spark, a nonprofit organization that uses dance to improve the lives of underprivileged and troubled youth in the developing world.

“We’re not teaching dance—we’re teaching life skills, and it happens to be through dance,” Parry says. Parry’s methodology is built on relentless positivity with students who are used to feeding off of negative energy. He instills a sense of responsibility to the larger group by forcing everyone to start over if one person is goofing off. Parry’s students learn that progress comes with consistent effort. “Dance reaches inside them so they experience these things physically, in their bodies. For instance, when their muscles are sore, you can teach them that, often, in order to grow you have to experience some pain.”

Over the past two years Parry has worked with street children and prisoners in Kenya, inhabitants (young and old) of leprosy colonies in southern India, and adolescents in a rehab facility in Costa Rica. Plans are taking shape for a project in Morocco.

In each country Promethean Spark partners with established organizations and local leaders so the program can take root. Ronald M. Hanson (BA ’63), India director of partner organization Rising Star Outreach, described the scene when Parry first went into the leprosy colonies in Chennai, India: “People would flock to him from all over. . . . Some had only stubs for feet. A couple were blind. Most did not have all of their hands and fingers. Shaun showed them that everyone could have the joy of dance.”

Cliff Njuguna, a member of the Boys Choir of Kenya, another partner organization, expresses amazement at Parry’s ability to go into the slums and prisons of Nairobi and teach students whom “if you [met] in the streets you would run away.”

Dance student and veterinarian Melania Gamboa directs the effort in Costa Rica, where Promethean Spark has an ongoing project in a detox and correctional center for troubled teens. “This program works. I have seen the positive change that it has caused in these kids,” Gamboa says. “They look up to him and think his classes are lots of fun. They have no idea that what they are learning is much more than just dance.”