At Dixie College, Barnum, ’52, MA ’52, PhD Iowa State University ’59, has been a professor, biological sciences director, dean of natural sciences, dean of administration, and vice president. He was recognized by the U.S. Department of Agriculture as one of three top entomologists in the United States. The St. George, Utah, resident donated valuable beetle and grasshopper collections, each numbering more than 10,000 specimens, for BYU research. With his assistance, BYU purchased the Lytle Ranch Preserve, a 462-acre research facility in Southern Utah. 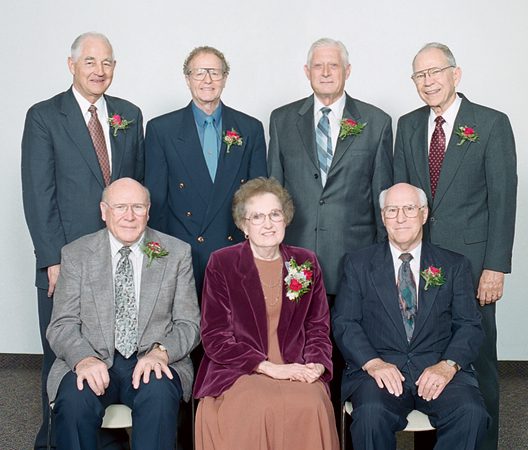 Berryessa, ’48, MS ’49, EdD Stanford ’59, has spent his career improving education worldwide. He was an educational consultant in Iran and Thailand and a teacher-education specialist for UNESCO in Asia. The Provo resident has been the international president of the Association for Childhood Education. During his 40-year BYU career, he was chair of the Elementary Education Department and received the Karl G. Maeser Award for teaching excellence. Utah also honored him as Teacher Educator of the Year.

Elder Call, ’57, MBA New York University ’58, has filled his life with church service, culminating in his assignment in the Second Quorum of the Seventy. He traveled to every country in Latin America for the Church Education System (CES), served as the CES director for 40 schools in Mexico, and spent two years as director of seminaries and institutes there. In Mexico he was a missionary, a mission president, and Missionary Training Center president. His BYU service included 21 years in Continuing Education.

Jones, ’50, has made extensive contributions to church, community, and education. She has served as president of the Parent Teacher Association (PTA) in Ukiah, Calif., three times; as president of California’s 27th District PTA; and as a member of the California State PTA board. Jones helped organize the Mendocino County Chapter of the California Association of Neurologically Handicapped Children and has written a book, Family Phases: What is Your Child Hearing? She also served more than 25 years in public affairs for the Church of Jesus Christ.

Matthews, ’55, MS ’60, PhD ’68, is well known for his work in advancing gospel scholarship. Matthews analyzed and compared the Joseph Smith Translation (JST) with the prophet’s original work to verify the RLDS Church’s publication of the work. His efforts enabled the inclusion of many parts of the JST in the Church of Jesus Christ’s publication of the Bible. The Lindon, Utah, resident joined the BYU religion faculty in 1971 and has received the BYU Faculty Award for Excellence in Teaching and Commitment to Adult Students and the Service to Continuing Education Award.

Tucker, ’51, EdD Harvard, PhD Columbia Pacific, has spent the majority of his professional life in education. He was chancellor of Purdue University North Central from 1972 to 1982, where he also taught until 1991. He has also been deputy executive vice president at the University of Utah and president of the College of Eastern Utah. In his retirement years this Michigan City, Ind., resident remains active in a clinical psychotherapy practice in Chicago. He is a diplomat of the American Board of Medical Psychotherapy.

Wilson, ’53, PhD Massachusetts Institute of Technology (MIT) ’57, of Orem, Utah, began a distinctive career while a student at MIT by developing one of the first computer-based Equations of State. The equation is used extensively and is known as the Wilson Equation. He has been a research scientist at several companies and has been president ofPVT Inc. in Houston. He taught at BYU from 1970 to 1978 and initiated the formation of the Wilco (now Wiltec) Research Company in 1977.

BYU to Honor Five at Homecoming

When the 1958 Cougars qualified for the College World Series the team faced a decision that made headlines.

Thirteen graduates have received 2006 College Honored Alumni Awards and were honored at homecoming.