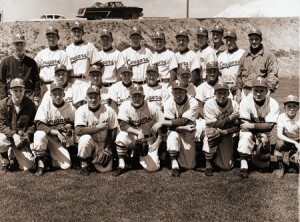 When the 1958 Cougars qualified for the College World Series in Omaha, Neb., the team faced a decision that made headlines at home and across the nation. The schedule for the eight-team tournament would require BYU to play on Sunday.

Leon R. Moyes (BA ’59) stands on the Hinckley Center second floor peering southwest at the progress of the Tanner Building addition. He marvels at the transformations of BYU’s campus. Fifty years ago, he and his teammates played baseball on a field just down the hill from the Hinckley Center, where the Tanner Building parking terrace is being built. The 1958 baseball team made fond memories on that field while earning national attention in an unexpected way.

In 1958, the BYU and Utah baseball teams ended regular season play with matching 8-4 records. The Cougars then blew past the Utes to take the Western Division championship, followed by victories over New Mexico and Colorado State in the postseason playoffs. Suddenly, for the first time in Cougar baseball history, BYU had earned a seed in the College World Series, an eight-team, double-elimination tournament in Omaha, Neb. 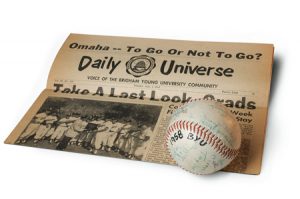 The players’ excitement was short-lived, however. Only days after their big win, they learned the dispiriting news that they could not compete because the tournament would require them to play a game on a Sunday.

“Omaha—To Go or Not to Go?” read the Daily Universe front page on June 3, 1958. It had not previously occurred to the team or to the administration that the tournament would require Sunday play. “We were kind of the guinea pigs or the pioneers in that regard,” Moyes says.

BYU President Ernest L. Wilkinson (BA ’21) went to bat for the team, seeing an opportunity to positively influence college sports. He gathered the team and phoned the NCAA, urging them to rethink their policy of requiring Sunday play. Wilkinson offered to pay team expenses the association would normally cover but to no avail. The NCAA told BYU either to play on Sunday or to not play in the series at all.

Disappointment was the collective reaction. “It hit us hard because you work so hard to get to that point and then all of a sudden it evaporates on you,” recalls pitcher Joe P. DeGregorio (’58). “It was a shame because we had an excellent team and who knows how far we could have gone.”

The players would also lose a chance to be watched by the pro scouts who flocked to Omaha. “We had an excellent ball club that year,” says Moyes. “I think there were several who may have had some opportunities to play professional baseball.”

However, the team stood behind the Church policy. “When it stares you in the face, you have to weigh what is important,” says outfielder Karl F. Brooks (BS ’58).

In 1961 the Cougars won their division title again but were not invited to the post-season playoffs because they had made it clear they would not play on Sunday. Later that year the NCAA finally put into place the “BYU rule” or Sunday-play policy, which requires a tournament schedule to be adjusted if a participating school has a policy against playing on a particular day due to religious beliefs. Because of the rule, the Cougars were able to compete in the College World Series in 1968 and 1971. However, Glen C. Tuckett (MS ’62), who coached the baseball team from 1959 to 1975 and was BYU athletic director from 1976 to 1993, recalls the battle to keep this policy alive. “We had to lobby every four or five years,” Tuckett says. The last challenge to the rule was in 1998, when BYU successfully petitioned the NCAA to keep it in effect.

As the 1958 team prepares to celebrate its 50-year anniversary during Homecoming 2008, the team members eagerly anticipate seeing each other, perusing photographs, and swapping life stories. They will also be recognized during the Homecoming football game.

Team members universally credit their coach for their success. “We had a great team and Jay Van Noy was the catalyst for that,” former pitcher Jack Cravens (’59) says. “He’s what I call a coach’s coach.” Brooks remembers Van Noy as the man who helped shape his character. “He had a way of handling us as players,” Brooks says. “He’s been one of my heroes ever since.”

Reflecting on the season, Hack Miller, Deseret News sports editor at the time, said, “When all of the stories are pasted in the books, BYU will likely have more championship honors for standing its ground on this issue than had the Cougars won the pennant!”

Head in the Clouds

Even after 2 tours in Iraq and 1,200 flight hours, Marine helicopter pilot Deborah Turley hasn’t had her fill of flying.

The Atonement: Understanding “The Central Act of Human History”

Before the miracle of the Atonement, everything else pales into relative insignificance. These books explain why.

The Kid with the Stratocaster

Lon Gibby’s innovative spirit and creative drive have propelled him through a varied career in media.