By Edward L. Carter in the Winter 2000 Issue 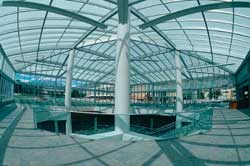 Patrons now enter the library through a light-filled atrium.

For 125 years the library at Brigham Young University has stood at the center of campus learning. Now a massive addition and comprehensive remodelingalong with assimilation of 21st-century technologyhave opened new doors for BYU education.

Today’s Harold B. Lee Library, with its moving bookshelves, network connections, 3 million volumes, and multimedia education centers, is a far cry from the days when Brigham Young Academy principal Karl G. Maeser lamented his library’s lack of an encyclopedia and a set of Latter-day Saint scriptures. Yet even as the new library is dedicated, “We are just beginning to plan the digital library that will serve the world,” says Randy J. Olsen, BYU’s deputy university librarian who oversaw the two-level underground expansion that concluded last year.

The physical shaping of such a library has been years in the making and has included many groundbreakings and dedications. It seems that every few decades the “old” library at BYU has been upgraded or replaced.

In 1892, after a fire had burned the old library out of the Lewis Building on Provo’s Center Street, a new library opened on the third floor of the Brigham Young Academy Education Buildingcurrently being remodeled, appropriately, into a library for Provo City. By 1925 the library in the Education Building had become old, and the school welcomed the Heber J. Grant Library (now the testing center) on University Hill. Thirty-six years later the J. Reuben Clark Library was built in the geographic center of campus. In 1974, after the J. Reuben Clark Law School opened, BYU’s library was named after Harold B. Lee, and work began on a 225,000-square-foot addition on its south end. And in 1999 workers put the finishing touches on 234,000 square feet of high-tech wonders underneath a grassy quad.

“The formats may change and the media may change, but the library has a symbolic and literal function at the center of campus,” says John R. Rosenberg, professor of Spanish and associate dean of the College of Humanities. Rosenberg chaired the faculty council that studied library expansion needs.

Maeser knew the importance of a library to an academic institution. In 1877, soon after Brigham Young Academy was founded, he appealed for books “of an instructive or interesting nature,” and he promised donors their names would be preserved. Fifteen years after Maeser’s plea, the library possessed 1,053 bound volumes and 596 unbound pamphlets.

When the collection moved into the Education Building before the turn of the last century, a campus publication described the library as “the most delightful room in the Academy” (The Normal, Feb. 15, 1894, p. 106). But if delightful, the library also demanded absolute silence. Emma Larsen, who worked as a library assistant during the first few years of the 20th century, recalled BYU President George H. Brimhall’s concerted efforts to keep patrons quiet. 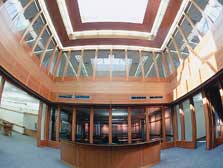 “My first obligation was to see that there was no talking in the library,” she wrote in a 1941 letter to a library historian. “Once Brother Brimhall gave me some cards he had prepared with blanks for the name of the offending students and said to me ‘If anyone talks in this room have them sign this card and bring the card to me and I will deal with the offender.'”

Brimhall proved an ardent library supporter. He once donated 100 books from his home collection and encouraged others to do likewise. Many at that time were reluctant to part with the few books they could accumulate, but the parting was made easier by the dedication and foresight of people like Brimhall and English professor Alice Louise Reynolds, who championed the library by campaigning for donations, establishing various library collections, and serving on library committees for 34 years.

Noise and collecting books were just two battles library staff fought over the years. Students brought food into the library, and romance just couldn’t seem to stop spilling over study carrels or stacks of books. By 1936 the library had acquired nearly 100,000 volumes; it also had acquired a nickname, the “Matrimonial Bureau,” and male students frequently met female counterparts there before a walk through “Lover’s Lane” on Maeser Hill. 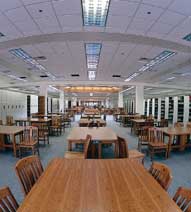 Students from every decade could relate experiences like that of Sara Hilbig Turman, ’97, who “found true love in the old Harold B. Lee Library.” One day, she says, “I decided to take a study break and walk up to the fifth floor. At the exact same time Marc decided to take a study break, and our paths crossed as I was coming up the stairs. . . . To me the Harold B. Lee Library will always be our matchmaker.”

Of course, romantic episodes take their toll on studies. One student in the 1960s penned a letter to the editor of the campus newspaper after a particularly egregious public display of affection.

“I am sitting at a study table on the second floor of the library trying to prepare a report,” the student wrote. “I am being disturbed every few minutes by a boy and girl across the table who keep kissing each other. I am trying to mind my own business, but a book held in front of one’s face does not keep out the sound of smacking lips.”

Not all humorous experiences at the library involve Cupid. Library staff relate some quirky stories about where students study. Some choose rest rooms, while others park underneath drinking fountains, on stairs, or atop overturned wastebaskets. During final exams students even have been discovered sitting in elevators, riding up and down while looking over their notes. 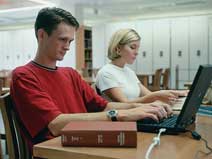 More than a few students tell tales about the music that precedes the library’s closing. While some danced on tables or ran among the books in pajamas, others managed to completely ignore the swan songs. Student janitor Lucinda M. Warner Mizer roamed the stacks in the early mornings of winter semester 1977, several years after the library’s volumes had topped 1 million. She recalls a few patrons who unwittingly spent the night at their study carrels.

“One of the other janitors found a student sound asleep and ran looking for our supervisor, who then escorted the poor soul outside,” says Mizer, who worked the 5 a.m. to 7 a.m. shift. “Another time, a student awoke before he was found, got up, and tried to leave the building unnoticed. What he ended up doing was setting off the building alarms, automatically summoning University Police and scaring all of us workers!”

A Library for the World

Even as they celebrate an overhaul started four years ago, library administrators also face the daunting task of defining the library’s role in a new century. At no time in its history has the library’s potential been greater.

Looking ahead, university librarian Sterling J. Albrecht sees a move toward “access rather than ownership.” The Lee Library doesn’t attempt to acquire even a quarter of all the books printed each year in the United States; still, the library adds 55,000 volumes annually.

In conjunction with physical growth, the library has undertaken an ambitious electronic growth program that promises limitless possibilities. Librarians recently began digitizing pioneer journals, slides taken of art exhibits, student theses, and other unique holdings. That effort creates a virtual library available to researchers and lifelong learners all over the globe.

“People don’t have to come here to get information like they used to,” Albrecht says. “That means we are becoming a library for the entire Church.”

The underground expansion added 50 percent to overall library space, making room for all periodicals, the L. Tom Perry Special Collections Library, and the Utah Valley Family History Center. Multimedia classrooms can host instructional broadcasts to places like BYUHawaii or an LDS stake center in South America. A 200-seat auditorium is wired for distance education and equipped with a 16-millimeter film projector, which the library uses to show off its collection of original movies from luminaries such as actor James Stewart and director Cecil B. DeMille.

When BYU President Merrill J. Bateman reviewed final plans for the underground library addition, he felt the need to increase flexibility. Builders made the floors of the addition strong enough to bear compact shelving that could store thousands more books. Those same floors also have extensive electrical and network wiring in case the students of tomorrow need only study tables with laptop computer access.

Such flexibility illustrates one problem with the library of the future: No one knows what the latest data storage and retrieval technology will be in 20, 50, or 100 years. Whatever the future holds, Olsen banks on the library’s influence expanding, even if its physical size does not.

In a time of isolation, reverence can draw society again into a circle of respect.

In a day of deception and distraction, we can find solid footing on the rock of revelation.

Perceptions of Jazz at BYU have changed drastically over the past 50 years.