How do exercise and depression affect memory? How can we detect breast cancer more effectively? What can alpaca vertebrae teach us about human spinal discs?

These are just some of the questions BYU professors are asking, and now, thanks to BYU’s new magnetic resonance imaging (MRI) research facility, they have a tool to find the answers. Opened last July, the nonclinical facility houses a 3-tesla MRI scanner—with a strength 30,000 times the earth’s magnetic field—that will open the door to research like developing athletic-training programs, studying addiction, and creating an MRI atlas of the human body. 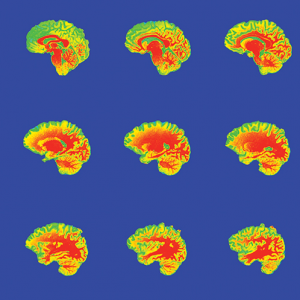 These slices of the brain illustrate a method of imaging that psychology researchers often use to find out where certain functions take place in the brain. Red indicates white matter, and yellow and green are gray matter.

Before the facility’s opening, only a few BYU professors were able to do MRI research by collaborating and using other facilities. Now those professors, as well as others, are giddy with the new possibilities. “When I found out they had actually delivered the scanner, I was over the moon,” says psychology and neuroscience professor C. Brock Kirwan, an associate director of the facility. “Ask any of my students. . . . I have pictures of the scanner being delivered that I show in my lectures.”

Designed to accommodate different projects and groups, the facility contains two examination rooms (for cognitive and behavorial testing), an MRI coil laboratory (for developing new imaging hardware), and a wet-lab preparation room (for cadaver and animal prep), as well as the MRI examination lab. The large control room—twice the size of most—was built with student observation groups in mind.

“What we have now is something that crosses all fields on campus,” says psychology professor Erin D. Bigler (BS ’71, PhD ’75), the facility’s director, who studies the brain—the most frequent target of MRI scans.

“By manipulating the physics of the situation, you can generate all kinds of different images,” says electrical engineering professor Neal K. Bangerter, another of the facility’s associate directors. One of Bangerter’s current projects is using new techniques to get 3-D images of the heart, a promising improvement over the traditional 2-D ultrasound imaging, which can’t see through bone.

“People are just coming out of the woodwork at BYU,” says Bangerter, who has been contacted by more than a dozen interested professors since the facility opened just months ago. Nearly 40 undergraduate students have been trained to assist professors, doctoral students, and master’s students on a variety of projects, many of which are multidisciplinary.

“I have collaborations with people over at the business school in information systems looking at the brain’s response to phishing e-mails,” says Kirwan. He’s also working with professors in exercise sciences to find out if it really is bad to eat after 8 p.m. The law school has teamed up with the departments of electrical engineering and psychology to learn how policies shape people’s perception of risk. And yet another team, made up of anatomists and biomechanical and electrical engineers, is working together to build a more accurate model of the larynx and vocal chords.

“It’s like this beautiful marriage of these different disciplines,” says Bigler. “That really is what magnetic resonance imaging is all about these days.”

How Does MRI Work?

Just understanding the acronym can help us begin to grasp the scientific process behind MRI.

Magnetic: A powerful magnet creates a strong magnetic field around the object being scanned, causing hydrogen nuclei in the object to align with the direction of the magnetic field. (Hydrogen, which is a component of water, is the most abundant element in the human body.)

Resonance: The object is bombarded with radio waves of just the right frequency, which “excite” the hydrogen nuclei and cause them to spin in a different direction. When the pulse of radio waves stops, the hydrogen nuclei continue to spin or resonate (like a tuning fork or a champagne glass) until the nuclei realign with the spin of the magnetic field. The strength of the nuclei’s resonant signal, the time it takes the nuclei to realign, and the density of the nuclei are recorded by a radio frequency coil surrounding the targeted object. The process takes a few seconds and is then repeated (sometimes hundreds of times) to collect all of the data needed to form an image.

Imaging: A computer translates the data collected by the coil into 2-D and 3-D images and videos. In the brain, white matter takes the shortest amount of time to realign, gray matter takes a little longer, and cerebral spinal fluid takes the longest. In one type of brain scan, the computer translates this data to show white matter as a lighter color, gray matter a little darker, and cerebral spinal fluid as black.

Imaging From Head to Toe 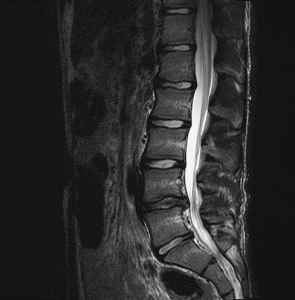 With the ultimate goal of designing artificial spinal discs, BYU mechanical engineers are using MRI to better understand the biomechanics of the human spine. This image shows a disc herniation. 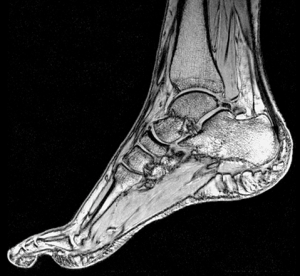 BYU researchers in exercise science use MRI to measure the volume and thickness of muscles in the foot to study the effects of a foot-strengthening exercise program.

Because of ecological and environmental change, humans are coming into contact with viruses that are new to scientists.