By Whitney Archibald in the Spring 2001 Issue 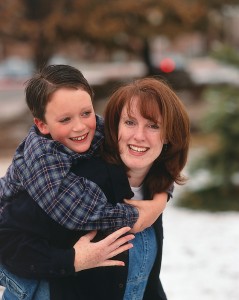 FOR two years Brandon Howard may have been the most popular guy in the dorms. But it’s not because he had the nicest car or thought of the most creative dates. He does have an infectious smile, contagious curiosity, and a great sense of humor. He’s dark and handsome—just not very tall.Brandon, now 8 years old, lived with his mom, Julie Howard, in Heritage Halls and then at the Foreign Language Student Residence, where she worked as a hall advisor from fall 1997 until summer 1999. The students in the residence halls loved having Brandon around. “I’d never been away from my brothers and sisters before, so it was fun to have Brandon as a substitute little brother,” says senior MaryAnn Chappell, who was then a freshman.A single mother, Howard transferred to BYU from the University of Oregon after her divorce. She decided to be a hall advisor when she remembered how difficult it was to make the transition from high school to college. She recalls, “I had a pretty traumatic freshman year, and I really wanted to be able to give something back to the students at BYU. People at BYU have done a lot for me in helping me come back to school.”Howard is the first to admit that it isn’t easy to juggle school, work, and motherhood. “Spending time with Brandon is easy,” she says. “I’d rather do that than anything. But it’s hard when I have to be away from him so much.” She is careful to make time for reading and going on walks with her son—and for their weekly Saturday night date.Now a full-time student in public relations, Howard still works part-time with BYU‘s Residence Hall Association as a student coordinator for the Office of Residence Life. During fall semester 2000 she was the communications chair for a residence hall leadership conference at which BYU hosted about 500 students from other universities. Anthony Todd Fischio, ’93, assistant director of residence life and Howard’s supervisor, appreciates her work. “Julie is an excellent problem solver. She’s not the kind of person that sits and waits for you to tell her how to do things,” he says.Howard’s approach springs from her desire to make a difference. As part of the committee that recently revised BYU’s training manual for resident assistants, she helped change the focus from the technical aspects of the job to nurturing the student community. She says, “I really wanted the resident assistants to catch the vision—to learn how to relate to people in a community. That is how we’re going to become Zion.”Another highlight of Howard’s education was a news reporting class where she wrote articles that won two NewsNet awards. John S. Gholdston, NewsNet’s managing director, says of Howard, “She’s innovative. She managed to see sides of stories that weren’t always obvious.”But Howard is more interested in serving than in gaining recognition. After she graduates in December 2001 with a degree in public relations, she hopes to work for a non-profit organization. “As long as I have to be out of the home,” she says, “I’d like to have my work be something that makes a really positive influence on the world.”

Check out the newly built Commons at the Cannon Center.

Pain pays, for the first Student Innovator of the Year.