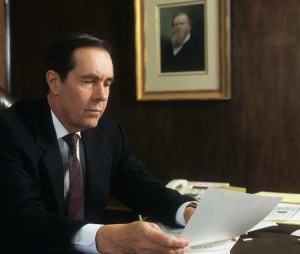 It was February 1996, and cancer was raging through his body.

“Rex told me he could still do things with oxygen,” explains his widow, Janet Lee Chamberlain (BS ’60). “Earlier in the day he had taught his Sunday School class in our home, where he and about 15 kids shared their favorite scriptures. In bed that night he said, ‘I can still argue a Supreme Court case. I can still prepare for that.’ I believed him. I had already taken him to the 10th Circuit Court in Denver, in a wheelchair and with oxygen, where he had argued a case—and won.”

Within an hour of their conversation, however, he was awake and his condition went from bad to worse. He insisted Janet take his legal briefcase in the ambulance so he could work on his 60th Supreme Court law case, but as it turned out, he didn’t need it. This was to be his last hospital stay. He died about two weeks later.

“The briefcase was just like him,” Janet says of Rex, who will be the honored founder at this year’s Homecoming celebration. “He was forward looking and didn’t wallow in anything. He could grab 10 minutes and make it worthwhile. He was an enthusiastic, tireless leader who told me every job he held was the best job in the world. His life, however, moved in a way most people wouldn’t guess. He did not live life with an agenda or a checklist, but everything he undertook he did with his complete heart.”

The many who remember Rex Lee would agree. 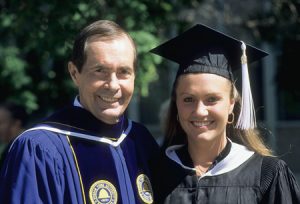 A tireless worker, Rex Lee gave himself completely to every role, whether it required preparing for a Supreme Court case, guiding a large and complex university, or nurturing relationships. During his time as president of BYU, he presided over the graduation ceremonies of three of his children, including daughter Stephanie.

Elder Bruce C. Hafen (BA ’66) of the First Quorum of the Seventy served as Lee’s assistant dean at the J. Reuben Clark Law School and was Lee’s provost when he was president of BYU. Hafen recalls Lee’s “childlike passion” for BYU. He remembers standing next to President Lee in the fall of 1995 as the president greeted the student body and sang the College Song. “I saw his eyes fill with tears as he fervently sang, ‘Our hearts are true to the BYU.’”

Dee V. Benson (BA ’73), now a federal judge, was among the students Lee recruited for the charter class of the law school. He says Lee would want to be remembered as a husband, a father, a first-rate appellate court advocate, and the founding dean of the J. Reuben Clark Law School. Benson calls the law school “the house that Rex built.”

Also in that first class was Lew W. Cramer (BA ’73), who later became president and CEO of World Trade Center Utah. “I remember Rex coming to the ASBYU offices and recruiting graduating seniors. I was one of them. He made us feel we were pioneers in a great adventure. He was young and fun, and we all felt we knew him. I especially value how he made law a noble profession.”

“Rex was a relentless recruiter,” says H. Reese Hansen, former dean of the J. Reuben Clark Law School and now the Howard W. Hunter Professor of Law. Hansen remembers Lee having remarkable interpersonal skills. “He would relate to anyone at any level on a personal, friendly basis. Out of every 100 persons who knew Rex, 99 believed they were one of his best friends. He had an uncanny memory about people and an uncanny way of connecting people with others.

“What you got with Rex is an amazingly fully developed personality,” Hansen adds. “He was not just a lawyer, not just a religious person, not just an effective administrator, and not just a personality. He was all those things. And as the most optimistic person I have known, he filled those roles with consummate grace.”

After fierce competition only two teams were left standing—both from BYU.