Every year he wears the same red jacket, the nicest one he owned 26 years ago when he first hosted a Passover service for BYU students. Good thing it still fits: more people have seen Victor L. Ludlow in that jacket than he would have predicted. Over the years, what started as an enrichment experience for a few Old Testament students has grown into an annual series of around 16 Passover meals for groups averaging about 200 people. 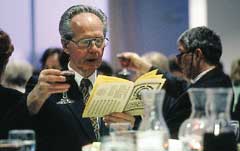 The “patriarch” at a Passover table recites traditional blessings over the wine (grape juice). At Victor Ludlow’s annual dinners on campus, students and guests experience the stories, foods, and activities associated with a traditional Passover meal.

At three-and-a-half hours a night, that’s a lot of volunteer time from Ludlow and his wife, V-Ann, who always accompanies him. Ludlow estimates that together they have hosted some 50,000 Passover guests in the last 26 years. And though the scripted Passover observances vary little from year to year, some guests return regularly. The tradition has earned Ludlow more than a few fans: “People at the grocery store, complete strangers to me, they’ll come up and say, ‘You’re Brother Ludlow, aren’t you?’ I’ll say, ‘Yes.’ And they’ll say, ‘I came to your Passover six years ago.’ So it obviously made an imprint.”First celebrated about 3,300 years ago in Egypt, on the night when the destroying angel “passed over” the children of Israel and they were at last set free, Passover is a lot older than the other holidays Americans typically celebrate. Ludlow always reminds his guests that they are sharing an experience with their ancestors–joining in words and symbols familiar to generations of Israelites and Jews, including the Savior.A professor of ancient scripture, Ludlow gathered his Passover knowledge while earning a doctorate in Near Eastern and Judaic studies at Brandeis University and while traveling and teaching in the Holy Land. He hosted his first Passover service during his second year teaching at BYU because, he says, “My Old Testament students had a hard time relating to subject matter that was thousands of years old. So I wanted them to experience something they could physically participate in.”Participation is still the hallmark of the Ludlows’ Passover dinners. Every guest receives a program that includes a script, or haggadah (which in Hebrew means “the telling” or “narration”), for the service. Ludlow’s may be one of the more detailed versions available in English; in fact, an Illinois rabbi once requested copies of Ludlow’s haggadah for his congregation.A Passover service, or seder (a Hebrew word meaning “order”), has 14 steps that include prayers, scripture readings, songs, hand washing, a meal, and the ritual consumption of green herbs, bitter herbs, unleavened bread, and wine (fruit of the vine). Green herbs (typically parsley or watercress) are eaten near the beginning of the seder and represent springtime and renewal–Passover always falls in March or April. The bitter herbs (typically fresh horseradish) are eaten just before the meal, after the Passover story has been recounted, to remind participants of the bitterness of slavery in Egypt.

Ludlow always tries to ensure the intensity of that bitter herb experience. He encourages participants to ingest generous quantities of the horseradish mixture, cheerfully averring that it can cure sinus ailments and restore hair to sparsely-covered heads. And though he has documented no cures, his bitter herbs are at least guaranteed to prompt sputtering, laughter, and redness of face. When he leads Passover services for LDS wards, Ludlow often brings along his own potent herbs because, V-Ann says, “He wants them to be bitter so that people have the experience. Relief Society sisters tend to water them down.”At four set times during the service, participants recite prayers and drink cups of wine (at Ludlow’s dinners, unfermented grape juice). It was this special Passover wine, Ludlow says, that Christ used when He instituted the sacrament. Because his seder audiences are predominantly Christian (though every year there are local Jewish families who attend), Ludlow always teaches about the Last Supper. For example, as some Christians may not have imagined, the bread for the first sacrament would have been broken from a crisp, unleavened loaf.“The bread is really plain,” says Alex Green, a junior humanities major from Provo. “Christ calls himself the Bread of Life, and at the Last Supper, which was a Passover, he took of the Passover emblems and implemented the sacrament. He had given the Passover to the Jews and later fulfilled it with the Passover meal. That really helped deepen my appreciation for the connection between our faith and Jews.” Green was taking a Jewish culture class from Ludlow when he attended one of the 1999 Passover dinners.The unleavened bread, or matzah, represents the haste in which the Israelites left Egypt, having no time for their bread to rise. When he began hosting Passover dinners in the 1970s, Ludlow had to make special orders for matzah. One year, he recalls, his order didn’t arrive on time. One of his female students, estranged from her Jewish family because she had joined the LDS church, called home to Milwaukee for help in obtaining the essential Passover bread. Her father offered to pay for and send matzah immediately, and that initiated the student’s reconciliation with her family.

Ludlow always displays Passover symbols, including a goblet for Elijah and a roasted shankbone, a reminder of the Paschal lamb.

There are always three matzahs at a Passover table. Early in the service the oldest man at the table, in the role of “patriarch,” breaks the middle of the three matzahs and wraps half of it in a napkin. This wrapped portion, called theafikomen, (a Greek word for “dessert”) is secreted and passed between the other people at the table. After the meal the patriarch must barter for its return by promising its possessor a gift or service; in a Jewish home, a child would receive the afikomen and negotiate some reward from a father or grandfather.The redeeming of the afikomen provides some of the most entertaining moments at Ludlow’s Passover dinners. Each table’s patriarch may or may not be related to the person with whom he must negotiate, and that person may try to finagle some kind of benefit for every person at the table.  Prices paid by patriarchs have ranged from impromptu performances of the Broadway song “If I Were a Rich Man” to yard work, spiffy dinner dates, and even trips to the Holy Land. Such a trip would be an ideal Passover prize. Jerusalem and Zion are prominent themes in the seder, which always ends with the phrase coined by Jews long cut off from their spiritual homeland: “Next year in Jerusalem!”In a Jewish home the time after the Passover meal includes a welcome for Elijah, who, prophecy says, will return before the Messiah appears. Ludlow likes to remind his LDS audiences that Elijah returned to the Kirtland Temple to restore the keys of his priesthood on April 3, 1836–which was during Passover. “It’s a great teaching moment,” he says. “You could go somewhere else and have a rabbi or somebody go through a Passover, but to be able to connect it to the New Testament and to Elijah and the Kirtland Temple–you just wouldn’t be able to make those connections like you can here in a BYU environment.”After paying tribute to the Jews who perished in the Holocaust, Ludlow closes his seder with psalms of praise and a final prayer. The guests file out past a table full of Passover emblems, back to a world where most meals carry no particular symbolism. And the Ludlows begin gearing up for another round. Rooms for the dinners on campus must be reserved a year early, and demand never wanes.From exuberant singing to playful bartering for the afikomen, from gratitude for the Exodus to horror over the Holocaust, “You’re happy and laughing and eating and just feeling good and then you’re sad and heartsick, all in the same evening. It runs the gamut of emotions,” says Patty Smith, secretary for BYU’s Religious Studies Center, who has been coordinating the Passover dinners on campus for 10 years now. “I think it’s a life-changing experience.”

Check out these frights and delights for the tastebuds from a Halloween BYU event with international flair.

Students pour in looking for great deals on everything from mittens to calculators.