Putting the Record On 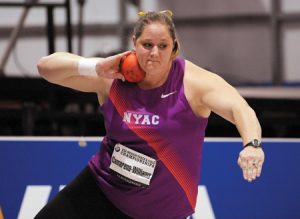 Hucking a ball about the weight of a gallon of milk roughly the distance between the pitcher’s mound and home plate, Jillian Camarena-Williams (’11) broke the American record for the women’s indoor shot put at the USA Track and Field Indoor Championships in February. She eclipsed the 24-year-old record, a throw of 19.83 meters, by 4 centimeters. “I had this feeling that I was going to throw really well,” says Camarena-Williams, who’d recovered from a series of injuries over the past couple of years with the help of her husband, BYU athletic trainer Dustin Williams. Before the championships, he told her they’d be bringing out the steel tape for her, which is done to officially measure record-breaking throws. Camarena-Williams says, “It was just one of those days where you knew something kind of big was going to happen.”

Camarena-Williams has notched a number of “kind of big” days. That record-breaking throw marked her seventh-straight national indoor shot put title. When not dominating the national competition, she competes as one of the top shot putters in the world. At the 2008 Beijing Olympics, she was the top-throwing American woman and finished 12th overall—just five months after having back surgery.

A master’s student in exercise science, Camarena-Williams came to BYU after graduating from Stanford. Outside of her training and schoolwork, she volunteers as a coach for the BYU women’s track and field team.

With the indoor American record, Camarena-Williams hopes to claim the outdoor record, which is about a foot farther at 20.18 meters. She also wants to leave her mark in world competition. “I want to be a medal contender for [the 2012 Olympics],” she says. “I definitely think it’s possible.”