By Gordon Laws In Durham, N.C., the air hung damp and hot, almost stifling the race. Because it was so hot and humid, “It was a really strategic race. It wasn’t a fast race or anything,” says junior Tara A. Rohatinsky-Northcutt of the 10,000-meter run held on the first day of the 2000 NCAA Outdoor Track and Field Championships. Temperatures during the week reached 90 degrees, humidity hit 80 percent, and the runners of the 10,000 slowed down to preserve energy. “Everybody wanted to hang back,” says Rohatinsky-Northcutt, “save energy, and kick at the end.” 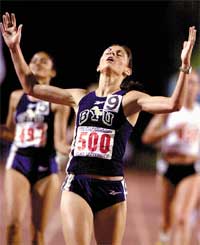 Hanging back and finishing strong played right into her strengths. Described by her teammates as “a big kicker,” Rohatinsky-Northcutt hung near the leaders during the 10,000-meter run, then in the last lap kicked past everyone, including the second-place finisher, BYU senior Maribella “Marty” Aparicio Hernández, to win the first of two BYU national titles at the meet. Rohatinsky-Northcutt seems almost surprised by her success. “Winning the race was just one of those things that you dream about,” she says. “And when your dreams come true, you don’t know how to react.”For senior Susan L. Taylor, winning the 1,500-meter run was both a dream fulfilled and the climax of a difficult college career. Taylor transferred to BYU following three injury-plagued, disappointing years at the University of Utah. But this year, “I have been healthy, and I really worked my tail off,” says Taylor. She turned that work and the momentum from a successful season into both a national championship and a school record 4:13.03, eclipsing Julie Jenkins’ 1987 mark.While Taylor and Rohatinsky-Northcutt brought home national titles, Hernández actually outscored them, placing second in the 10,000 and fourth in the 5,000, leading the BYUwomen’s team to a fourth-place finish. Her success in the 5,000 was particularly impressive to distance coach Patrick Shane. “That was a big, gutty performance by Marty, coming back to score some big points for us,” he says.And for Hernández, the 5,000 was the most satisfying race of the meet. “As we were warming up, so many girls kept saying, ‘It’s so hot, it’s so awful.’ But I thought, ‘We’ve run in hot weather before.'” Battling the heat and residual fatigue from the 10,000-meter run two days before, Hernández stayed among the leaders for most of the race, and “even though I was tired on the last lap and got fourth, I was happy because I had given it 100 percent the whole way,” she says.The team’s fourth-place finish was a strong answer to pollsters who picked the Cougars to finish in the lower half of the top 20. But while the three distance runners are happy with the team’s success, they seem a bit more thrilled about their individual performances. “When it’s just you and the finish line,” says Rohatinsky-Northcutt, “and beyond that are the lights and cameras and all the glamour, it’s really exciting.”

Seven pregnant dancers at BYU joined together in dance, claiming their identities as both dancers and mothers.

Filling Her Own Bookshelves