Put Your House in Legal Order

Now is the time to answer life's "what if" questions. 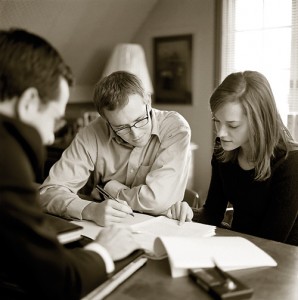 Many people put off making legal decisions until it’s too late. A BYU legal expert suggests some basic steps couples and individuals can take to whip their household into legal shape. Photo by Bradley Slade.

Some of life’s “what if” questions can be so frightening that we avoid them: What if my spouse dies? What if we both die and our children are left orphans? What if I become so disabled that I can’t make my medical wishes known? Scary though they may be, these questions need to be answered, says attorney H. Reese Hansen, professor of law and former dean of BYU’s J. Reuben Clark Law School. But add to the fear factor the common perception of the legal world as intimidating and expensive, and many people delay squaring away their legal matters until it is too late.

If you are married and have children, especially minor children, Hansen recommends a few basic steps that can help you put your house in legal order. Many of these steps also apply to those who are not married or to those whose children are raised. (It should be noted that though the principles discussed here apply generally, laws vary from state to state.)

Where There’s a Will

You’ve heard it a hundred times—if you don’t have a will, get one. If you haven’t heeded this counsel, Hansen has a verbal spanking for you. “It’s just irresponsible not to have a will,” he says.

If you have minor children, perhaps the most important purpose of a will is to appoint a guardian in case both parents die. Though this situation is hard for many parents to imagine, it is not as rare as people think, says Hansen. “People do things together, and there are enough occurrences of situations where both parents perish, leaving minor children, that everyone should realize it could happen to them,” says Hansen. “Cars wreck, airplanes go down, and boats sink at Lake Powell.”

When neither spouse has a will under such a scenario, the couple’s opportunity to choose a guardian for their children is lost forever. Instead, it will be up to a judge to decide, in consultation with surviving family members, who will best raise the children. If the parents leave more than a few minor children, there is a chance they will be split up among relatives and friends, not necessarily in a way the parents would have wanted. With a will that designates a guardian or guardians, those left behind can be spared such a nightmare.

A will should also establish financial arrangements, usually through a trust established in your will, to take care of the children should the main breadwinner or both parents die, says Hansen. Guardianship of the children isn’t just making medical choices and attending parent-teacher conferences, he says—it takes money, and that money has to be managed by someone. “Hopefully, there will be assets available to raise the children, such as life-insurance proceeds, IRA accounts, and savings. Who should manage those assets? Again, if the parents don’t talk about it and decide, then the court will have to make the decision,” says Hansen.

In most cases the people you choose to raise your children would also be the ones you name as trustee of your trust should you and your spouse both die. But in some cases someone else is better able to manage the assets. “But again, the decision has to be made,” says Hansen. “A well-conceived trust arrangement can minimize court intervention and oversight and make it possible for the trustee of the assets to manage them in a thoughtful way and without court supervision.”

If you have minor children, the most important purpose of a trust is to provide for those children in the event of your death. By carefully crafting the trust language, you can also prevent young children or teenagers—or even young adults—from inheriting too much money too soon.

Of course, a will (as well as a living trust, discussed below) also enables you to decide who will receive your assets after your death and allow survivors to avoid the hoops, expenses, and delays of probate court.

For some people a living trust may be advisable. Such trusts are useful as a means of managing a person’s assets in case of incapacity or disability. A living trust also provides a way to manage complex asset holdings where professional management is desired. A living trust may be particularly useful if a person owns assets in multiple states. By transferring the assets into a single living trust, it is possible to avoid having to go to probate court in each state. Living trusts have the additional possible advantage of avoiding probate court hearings altogether.

Every trust has a trustee—the person who manages the trust—and beneficiaries. You can name yourself as both trustee and one of the beneficiaries, meaning that, as long as you’re alive, you control the trust, have complete access to the trust, and benefit from any income generated by investment of the trust assets. Your “successor trustee” is the person you name to manage the trust upon your death.

“We tend to be able to afford the things that matter the most. This is one of those things that ought to be worked into your priorities.” –Reese Hansen

For those with greater wealth, above $2 million, especially skillful estate planning is needed to reduce or eliminate estate taxes, says Hansen. That asset figure includes the value of all life-insurance policies, savings accounts, IRAs, stocks and bonds, and real estate.

Get Your Medical Wishes in Writing

Many people don’t want heroic measures taken to artificially prolong their life when an injury or illness is terminal or the person is in a persistent vegetative state. But “most” is not everyone, and because people differ in their wishes, every adult should legally make his or her wishes known. The Terri Schiavo case, which came to a head in 2005 after seven years of litigation, was a wake-up call that every adult needs to make his or her end-of-life directives legally binding. Schiavo had no living will, and because her husband and her parents disagreed about whether she would want to be kept alive with a feeding tube, the courts had to decide who would make the end-of-life decision for Terri. The court sided with Terri’s husband, who chose to have the feeding tube withdrawn. Terri died 12 days later.

“The first tragedy that created Schiavo’s vegetative state was perhaps unavoidable, but the second tragedy was not—the disintegration of family relationships as the two sides pitted themselves against one another,” says Hansen. “It was just horrible what happened to that family, all of which could have been avoided very simply. This is not hard work.”

It is hard to think about the problem, he acknowledges, and it is hard to make the decision. But once made, the decision is not difficult to implement. It’s a matter of a few pages of legal language and the signatures of you and two witnesses.

Resistance to making a living will often stems from the feeling that we are personally immortal, says Hansen. “We understand that everybody’s going to die, but we don’t necessarily understand that that applies to each of us. We cannot grasp the concept of the possibility of our death. So it’s the kind of thing that’s easy to put off,” he says.

Round Up Your Records

“So often the spouse with primary responsibility for raising the family doesn’t know where these documents are and what they mean,” says Hansen. “Put them in a place where they’re easy to find, so once someone finds them, even if he or she doesn’t know what they mean, at least you have something to take to somebody and ask for help.”

It’s also a good idea for spouses to know where one another keeps passwords for accounts, including Internet accounts. For single adults, it would make sense for the person designated in your will as executor to know where you keep your documents and passwords.

Turn to a Pro

For those who might be tempted to save money by writing up their own documents or using template documents from the Internet, Hansen advises them to resist: “Self-help in this area is very dangerous. These kinds of arrangements are, in my view, too important and too complicated to try on your own or to trust to a Web site.”

The criteria for selecting an attorney are similar to the criteria for selecting any professional you intend to hire and pay. You want someone who specializes in estate planning and has experience writing wills. He or she should be adept at understanding individual family situations and adapting legal documents accordingly. “You don’t want one-size-fits-all estate planning,” says Hansen.

To find a good attorney, ask lawyers you know for referrals or ask friends who you know have a will. Once you make an appointment, consider it preliminary and without obligation. If you decide you are uneasy with the lawyer, don’t go forward. “People are reluctant to walk out of an office and go somewhere else, but if anything about the attorney makes you uncomfortable, move on and go somewhere else. Estate planning is too important to feel trapped by an early decision,” says Hansen.

While it’s true that legal services cost money, the steps described here should not be out of reach for anyone, Hansen says: “It’s the kind of thing you do instead of having your teeth whitened or taking one trip to Disneyland. We tend to be able to afford the things that matter the most. This is one of those things that ought to be worked into your priorities.”

Sue Bergin is a part-time faculty member in the BYU Honors Program and a writer and editor in Orem, Utah. Domesticating a Degree

Paul Gabrielsen reads his award-winning essay about Rex Lee at the opening ceremonies of Homecoming 2008.

Is This War Legal, Ethical, and Prudential?

The Will of the Father in All Things

We must be willing to give all we have to our Father in Heaven.