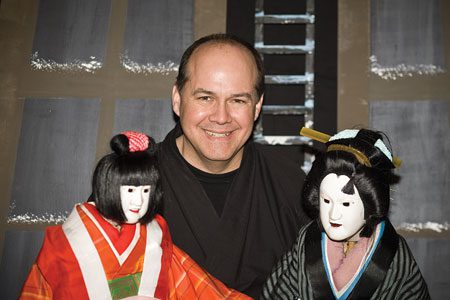 Martin Holman has introduced traditional Japanese puppetry to scores of his students and U.S. audiences.

Under the lights of BYU’s de Jong Concert Hall, a three-quarter-life-size puppet of a Japanese maiden, adorned in traditional costume moves about the stage in graceful, fluid motion. Its movements are controlled by three puppeteers, dressed in black, who work together behind the puppet in a sort of crowded dance—carefully choreographed to keep attention on the puppet.

As the performance concludes, J. Martin Holman (BA ’81) removes his black hood and addresses the audience of students, parents, and children. “How did you like that?” he asks.

Holman, a professor at the University of Missouri–Columbia, is the director of the Bunraku Bay Puppet Troupe, the first and only American troupe to perform this traditional Japanese art, called Bunraku. Since 2001 Bunraku Bay has sent more than 150 students to Japan to train in Bunraku.

Holman learned about Bunraku puppetry in a theater class while studying Japanese and theater at BYU. A returned missionary from Japan, Holman was fascinated by the art. In the early ’80s he visted Japan on a fellowship and saw Bunraku performed for the first time.

On a later trip in the mid-’90s, Holman sat in on a rehearsal of the 170-year-old Tonda Puppet Troupe. At the conclusion, someone asked if there was anything they could do to help Holman. He gathered his courage and asked if they would train him in their art.

“I thought they might just laugh or scowl,” he says. Instead, they said, “You start tomorrow.”

After two months, Holman was ready for his debut. Television crews showed up for the event. “They said I was the first foreigner who had ever done this.”

Holman was shocked—in the 150-plus years that foreigners had been in Japan, could it be possible he was the first nonnative puppeteer? “I guess that’s my claim to fame,” he says.

Bathe in the Possibilities

Being globally-savvy should be a main focus for engineering students, says the Weidman Center.

Linton Salmon holds a wafer containing 1,200 of the tiny batteries he helped invent.