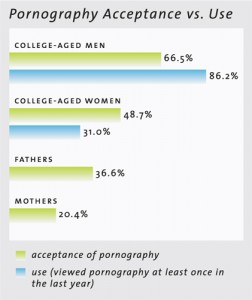 According to a recent study led by family life professor Jason S. Carroll (BS ’96), the majority of college-aged students nationwide see pornography use as an acceptable expression of sexuality. The study documents that both sexes between the ages of 18 and 26 are far more accepting of pornography than their parents: while nearly half of college-aged women say pornography use is acceptable, only one-third of their fathers—and one-fifth of their mothers—agree.

Following these seven pointers can help to turn our media choices into substantial edification in the home.