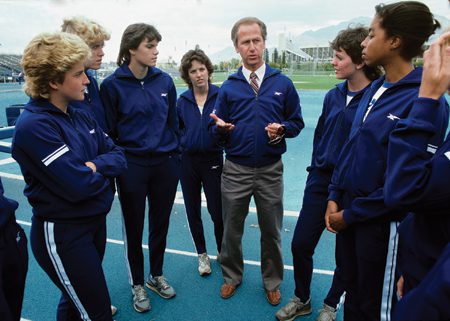 During Craig Poole’s 30-year tenure as the head woman’s track and field coach at BYU, he spurred more than 700 athletes to winning seasons and personal bests.

After decades of coaching Cougars, R. Craig Poole is now head coach at the U.S. Olympic Training Center in Chula Vista, Calif. When he received a letter in the mail from the U.S. Track & Field and Cross Country Coaches Association, he mistook it for his paycheck. It turned out to be an announcement of his induction into the association’s hall of fame.

“I honestly was just totally dumbfounded,” says Poole. “I thought you had to be almost dead to get inducted.”

Poole joins 150 elite track-and-field coaches in the hall, including another BYU great, Clarence F. Robison (BS ’49). “There are lots of coaches in the past who have been my icons who have been honored. It’s just a wonderful and choice privilege to be counted amongst them,” Poole says.

“He cared about the athletes he worked with. They were important to him,” says Doug F. Padilla (BS ’83), director of track and field operations at BYU. Coach Poole was also a devoted student of the sport, Padilla adds. “He was constantly reading information, participating in studies, and investigating, trying different things to see what was beneficial.”

In addition to coaching the Cougars, Poole coached internationally at the World Championships, the World University Games, and the Olympics before leaving BYU in 2010 to train Olympic hopefuls full-time. He’s currently preparing athletes for the 2012 Olympic Games in London. “His experience and record of success made him an easy choice for this important position,” says Benita Fitzgerald Mosley, Chief of Sport Performance with U.S. Track & Field.

Alistair Aitchison stumbled upon his life mentors. Now he mentors others at work, at church, and on the football pitch.