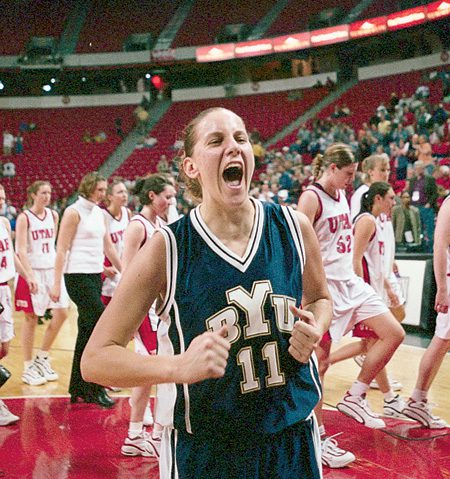 THE women’s basketball team finished the regular season with an 18-12, 8-6 record. In postseason play the Cougars advanced to the title game in the MWC championship, where they lost a close game to CSU. They were then invited to the WNIT for the third year in a row, where they beat Oregon State but lost to Hawaii in the second round.
The highlight of the season for the Cougars was an MWC semifinal round tournament victory over the Utes, which broke Utah’s 14-game winning streak.In the second half the Cougars erased a 20-point deficit and went on to defeat Utah 57-50. “Our second-half comeback was one of the biggest comebacks I’ve been involved in as a coach,” said BYU head coach Trent Shippen.After four years as head coach, Shippen has decided to step down. BYU has named Jeff Judkins to the head coaching position.“We are pleased with the work Trent has done,” said President Merrill J. Bateman. “He has a successful record and has made a significant contribution to women’s basketball atBYU. We now turn our support to Jeff Judkins, who brings great strength to the program, and we look forward to a successful future.”Judkins had been an assistant under Shippen last season and was also head of basketball operations for both the men’s and women’s programs the past two years. Shippen compiled a 72-48 (.600) record in his four years as head coach. He will remain as an assistant coach under Judkins.Shippen said that concern for his family was a major consideration in his decision to step down.