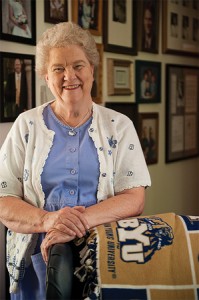 Pamela Johnson Paine (BS ’59) has worked as a docent at BYU’s Museum of Art, volunteered at the Hinckley Center, and served on the Emeriti Alumni Board for seven years. Now Paine has agreed to serve the Emeriti Alumni program as president-elect. She will continue to support the Emeriti Alumni as a community and encourage members to stay involved with the university and each other.

Paine earned her bachelor’s in homemaking education the same year she married Joseph Peter Paine (BS ’59). He was a chemist, and the young couple moved to Seattle when he got a research job in early space travel at Boeing. They later lived in Pittsburgh, which her children consider their hometown, and then San Jose, Calif. Paine is the mother of five children, and four of them have attended BYU.

She discovered a great love for the program. “BYU Emeriti serves a really wonderful purpose in the lives of emeriti in opportunities for meeting and having lectures, programs, and entertainment. It acts as a stimulus—it keeps us in touch with university programs. We recently heard a wonderful presentation on the animation program, for example.”

As emeriti president, Paine will oversee communication and activities for the program. She hopes to reach out to more emeriti alumni who attended BYU 40 or more years ago as well as retired faculty. “There are many wonderful people to learn from—it’s really delightful to get together,” Paine says.

A Sterling Achievement For a BYU Great