Mechanical engineering PhD student Shannon A. Zirbel (BS ’10, MS ’11) is shaking things up with a NASA Space Technology Research Fellowship worth up to $198,000. For her second summer now, Zirbel will ship out to NASA’s Jet Propulsion Lab, home of the Mars rover team, to apply origami in space. 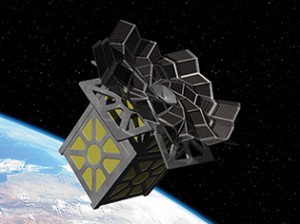 Origami is Zirbel’s particular brand of compliant mechanism engineering, an engineering approach that uses flexibility—think tweezers or book bindings—rather than hinges. The compliant mechanism approach cuts down on weight and friction. With help from mentors like physicist and world-renowned origami artist Robert Lang, Zirbel has dreamed up an unfolding flower, of sorts, to catch the sun’s rays—a solar array that would be the largest ever launched in space.

“Some of it’s mathematical,” she says, but “my own personal approach tends to be to play with it—build something and fold and figure out where things aren’t working and modify the design from there.” Zirbel’s tinkering has produced answers to problems created in transferring origami to solar panels.

Engineering professor Larry L. Howell (BS ’87) recently showed Zirbel’s solar-array research at a conference at Wright-Patterson Air Force Base in Ohio. “[The solar array] got the most attention,” says Howell. “The Air Force assigned personnel to start on [a similar] project that day.”

This NASA-sponsored “selfie space cam” cheaply and safely monitors the condition of spacecraft.

The planetarium’s projector can show the positions of stars and planets as seen from any earthly location.