At least one Cougar—Andrew M. Rutherfurd (’13)—will swim at the 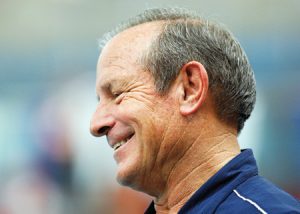 Come summer, swim coach Tim Powers will have seen 17 of his Cougars compete in the Olympics.

London Olympic Games this summer. He will be the 17th athlete BYU swimming coach Timothy J. Powers has trained who has competed at the Olympics. Depending on how the trials go, that number could hit 18.

Powers, who is retiring from BYU after this season, has sent at least one swimmer to every summer Olympics except one, beginning with Piero S. Ferracuti (BS ’80) in the 1972 Munich Games. Powers was even invited to coach for Singapore in the 1988 Seoul Olympics and for Lithuania in the 2000 Sidney Olympics, but he turned down both offers so he could welcome his new recruits to BYU each fall. His Cougars came first.

Those priorities paid off. During his 37 years of coaching at BYU, Powers has brought home 20 conference championships. Ronald C. Menezes (BS ’86), who swam freestyle in the 1984 Los Angeles Olympics and at BYU, says Coach Powers always had his students’ best interests in mind. Before practice every day, Menezes went to Powers’ closet-sized office and confided his concerns about majors and dating. “It was just like I was talking to my father,” he says.

Powers’ BYU Olympians have represented 11 different countries. “I’ve got to think it’s helpful in our missionary efforts,” he says, “especially when they’re the best athletes they have in the entire country and then their names are associated with and linked to BYU.”

Now, after nearly four decades, Powers is leaving the poolside to serve his own mission with his wife, Patcee. “We want to feel like we’ve got a new challenge to sink our teeth into,” he says.

See BYU Olympians throughout the years.