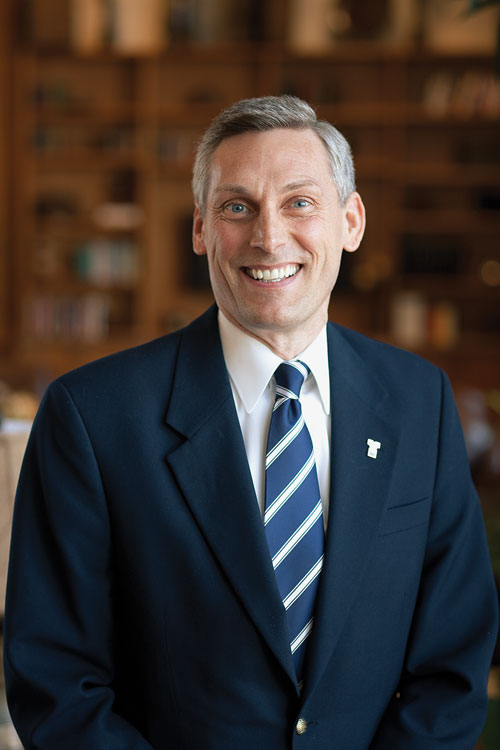 The new president of the BYU Alumni Association, Chris Feinauer seeks to help alumni give back to BYU.

There was no doubt that Chris Feinauer (BS ’80) would go to college. His parents were German immigrants who believed a formal education was essential to a successful life and insisted their five children attend institutions of higher learning.

And there was little doubt he would attend Brigham Young University. “It was a family tradition,” he explains. “All my older brothers went to BYU. . . . BYU was a big deal at my home. And it was a big deal in our little ward in Hood River, Ore., too. Our bishop would take youth in the ward on tours to the Y, which inspired me to work hard to get admitted.”

Feinauer, now a senior vice president for U.S. Bank in Salt Lake City, says he had very good college experiences at BYU. He met his wife on the International Folk Dance Ensemble and earned a solid business degree.

“BYU was great,” says Feinauer, the new president of the BYU Alumni Association, “but since I’ve been serving the university—first as a college director for the Marriott School and then as a member of the BYU Alumni Association executive board—my eyes have been opened to all the goodness across the BYU campus. I was a business major, so I focused on that, and I participated in the arts, but BYU is doing great things in every college and is even more remarkable than I realized as a student or in my early years of volunteer service.”

During his tenure as the association president, he wants to help students to feel some of the same fervor he has for BYU. “I want the association to teach students what it means to be alumni, to welcome them as part of the family, and to let them know the expectations,” he says. He believes that through the efforts of the Alumni Association, BYU students can become more involved alumni, especially as donors.

“BYU vice president John Tanner spoke at one of our alumni board meetings and described an alma mater as a ‘nourishing mother,’” Feinauer says. “I was so impressed to think how a university nourishes its children, and I realize that the nourishing goes both ways. We need alumni to nurture BYU, and I hope we can encourage a higher concentration of alumni donors. I would like to develop alumni who have the inclination to give when asked.”

Feinauer has served in BYU advisory or leadership positions for more than 10 years and is an eager sports fan who has had football season tickets since the new stadium was built in 1982.

“The BYU experience helped define the life I live today—professionally and spiritually,” says Feinauer. “I am deeply grateful for the opportunity to attend as a student and to return now and serve the university.”

Yeah Samaké beat the odds in Mali. Now he’s helping others do the same.

The strength of BYU’s undergraduate program is propelling graduates into the upper reaches of academia.