Once vowing he would never run another marathon, a BYU alum now runs a 26.2-mile race every month. 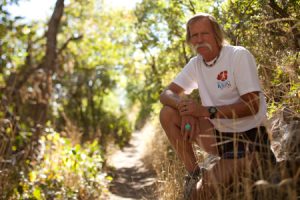 John Bozung, a race director and try marathon man, completed his 300th marathon last July. He continues to run a marathon every month and has raced on all seven continents.

After John H. Bozung (BS ’82), of Orem, Utah, completed his first marathon in 1988, he vowed he would never run another.

“I ran cross country and track in high school but didn’t give much thought to additional running until I was in my 30s and my brother-in-law challenged me to a 10K (6.2-mile run),” Bozung says. He agreed to race, and even though he had done little training, he beat his challenger. “This got me thinking about running again, and I registered for my first marathon in Los Angeles.”

The marathon, however, was so difficult, both physically and mentally, he swore he would never do it again. He kept that declaration for about a year, then finished eight races in the next five years.

Bozung has run more than 300 marathons, completing number 300 in July 2010. And he has no intention of stopping.

Bozung has run with penguins in the Antarctic, cruised through kangaroo country in Australia, and finished a marathon at the ancient coliseum in Athens. In fact, he has completed marathons on all seven continents. He has embraced the race in a way that has earned him the title Marathon Man by his friends. “Because my body is used to going the distance, I don’t hurt after a race,” Bozung says. “I hope I can do this until I’m dead.”

“John might be one of a kind,” says Hawk Harper (’87), a champion runner who owns the Runner’s Corner in Orem. “He is an anomaly in that he can go out every month and do a marathon without much training in between. While his best finish times are behind him, he has tremendous abilities. I’ve been around him when he has done 10 one-mile repeats and averaged a little more than five minutes per repeat. That’s pretty impressive. I consider him a great ambassador for running.”

When Bozung was 52, he completed one marathon each week for 52 weeks. Additionally, he has run a marathon each month for more than 185 consecutive months, and he keeps running. “John is an incredible endurance athlete,” says Richard H. Hart II (BS ’93), a marathoner and Ironman who owns Elevate Fitness in Orem. “In terms of endurance, he’s in the top 10 percent of runners anywhere.”

Bozung also participates in 50K, 100K, and 100-mile runs, and when he isn’t running, he’s often directing races. He is the founder and race director of the Squaw Peak 50-mile trail run, the Kat’cina Mosa 100K, and the Kahtoola Bigfoot Snowshoe Festival.

One year Hart competed in Bozung’s Kat’cina Mosa race, which takes runners on a grueling trail up and down the Wasatch Mountains for more than 60 miles. “It was one of the most fun races I’ve ever completed. It’s a beautiful course, but we climbed 17,000 [cumulative vertical] feet and it was so challenging. I called John three or four times just to get encouragement that I could actually do this race.”

Bozung says Hart was one of 54 runners who started the race that year; 46 finished. “It’s been my most successful year in terms of runners.”

One of Bozung’s recent runs took place on the Inca trail near Machu Picchu in Peru. “Those Incas built their trails straight up and down with no switchbacks. It was tough going, but the effort was worth it,” he says. “I am also a photographer and took lots of images. I could have made better time, but I wanted to record what I was seeing. It was one of the visual highlights of my life.”

Among Bozung’s favorite marathons is the Mt. Everest Challenge—in large part because it is the only marathon in which he placed first. It was certainly a challenge though: the average altitude for the first 20 miles of the run exceeds 11,000 feet. Bozung also favors the Walt Disney World Marathon, in part because this is the race where he proposed to his wife. It has been going for 18 years, and he’s never missed a race.

Not every race Bozung runs is enjoyable, but he always finishes. At the Top of Utah Marathon two years ago, he tripped at the beginning of the race and fell face first. “I went down like a tree,” he says. “The paramedics were there in three or four minutes and wanted to help me off the track. I wasn’t about to abort the race.” Bozung’s wife, Marcy—whom he met at the St. George marathon five years ago—is a nurse. She helped stop the bleeding and then bandaged Bozung. He had broken his nose and dislocated his little finger, but he kept going. “It was an emotional finish, and I passed 125 runners,” says Bozung. “I’ve had worse times.”

“I’ve always been competitive and have often placed, but as far as a good running time, the clock is behind me,” Bozung says of his running career. “I finish every race, but I now get pleasure in helping someone who is struggling.” He says, “I still run marathons because they are long enough to remain a challenge and because I like the camaraderie of the racing community. I would never say marathons are easy. Some are good runs and some make me question what I’m doing.”

10 Steps to Run a Marathon

Have you always wanted to run a marathon but weren’t sure how to start? Richard H. Hart II (BS ’93) has run many marathons and owns Elevate Fitness in Orem, where he frequently counsels runners and other athletes. Hawk Harper (’87) is a champion runner who owns the Runner’s Corner in Orem. Here they offer 10 steps to help you work up to and complete your marathon.

1. Learn about your feet and any orthotic issues you might have. Find out your limitations and capabilities.

2. Begin a strength-training program using weights and other exercises to strengthen your core. Train three days a week (Monday, Wednesday, and Friday).

3. Create an overall foundation of health. Eat healthy foods and get plenty of sleep at night.

4. Run three days a week on the days that you don’t do strength training (Tuesday, Thursday, and Saturday).

5. When you first start, do a combination of walking and running: walk five minutes, run one; walk four minutes, run two; etc. Slowly increase running time until you are running 30 to 40 minutes twice a week. Don’t think you have to have a set marathon speed. Your speed should and will vary.

6. Run consistent, easier runs on Tuesdays and Thursdays. Try running on trails and hills. Increase mileage and do longer runs on Saturdays.

7. Decrease strength training to only two days a week and increase running to four days a week.

8. Compete in several smaller races: run one or two 5Ks; add a 10K; then try for a half marathon. Limit racing to a couple of weekends a month.

9. Work up to running 20 miles (but no more) on your big-run days (Saturdays). Avoid doing long runs back to back. Your body needs time to recover. A couple of weeks before the marathon, taper down to 15 miles, then maybe 10 to 12 miles. Don’t use everything you have before the marathon.

Ask an Expert: How to Train for a Marathon

If you’ve considered training for a marathon, Coach Eyestone is behind you.