Nothing Little About Filmmaker’s Ambitions

BYU grad wants to be the nicest filmmaker in Hollywood. 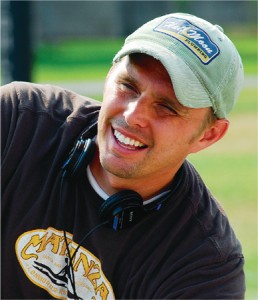 After several student films at BYU, Ryan Little has taken his talent to the big screen.

Without his persistence, T. Ryan Little (BA ’00) probably wouldn’t be in the film industry today. “I had to apply three times to get into BYU and then twice to get into the film program,” Little says. “Every time they turned me down I’d ask what I needed to do and then get working on it.”BYU associate professor of theatre Rodger D. Sorensen (BA ’72) says, “Determined is a good word for him. Ryan has clearly articulated goals and is intensely focused. If he says he’s going to do something, you know he’ll do it.”With that determination, Little left BYU with close to 20 short films to his credit. In 1999 he gained national prominence by winning the Jimmy Stewart Crystal Heart Memorial Award for his senior film, The Last Good War, which also won a “student Emmy.”Inspired to create another war-themed film, Little approached Dennis A. Wright (MEd ’73), a BYUâ€ˆreligion professor and coauthor of the book Saints at War. “Dennis shared some wonderful stories with me that he wished had been included in the book,” Little explains. “I contacted these remarkable veterans, met with our writers, and began shaping the story concept.”The film, Saints and Soldiers, was shot in the area around the Sundance ski resort, and upon its completion Little and coproducer Adam Abel entered approximately 17 film festivals, hoping to be accepted into one or two. They were astonished when they were accepted into every festival and began attending two a month for nearly a year. To their amazement, Saints and Soldiers won a top award at every festival.“That was my heart and soul project because I was right there from the beginning; it really is me,” Little explains. “It wasn’t about making money. It was about making a movie for the pure love and passion of filmmaking, and it fulfilled that purpose on a higher level than I had ever anticipated.”Little’s interest in filmmaking began as a boy when he watched the 8mm films his father had made as a child. “He would show me his movies, and I always thought that was something I wanted to do as a hobby, just for fun,” Little says.

“I get the most fulfillment out of doing movies that are true and inspirational. Those are the ones closest to my heart.”–Ryan Little

Far more than a hobby, filmmaking has become a serious vocation for Little. Since Saints and Soldiers, he has explored film in many different directions, from sports to children’s subjects. His current project is a supernatural thriller. “Every time I make a movie I change genres because I want to try everything,” Little explains. “I like to have a new experience with each movie I make.”Little’s film last summer, Forever Strong, was the true story of a rugby team from Salt Lake City and their philosophy to be champions of life, not just champions of the game. “I get the most fulfillment out of doing movies that are true and inspirational. Those are the ones closest to my heart,” Little says.Little continues filming and lives in the Alpine, Utah, area with his wife, Lynnita, and two sons. His dream as a filmmaker, he says, is “to be known as the nicest director in Hollywood.”