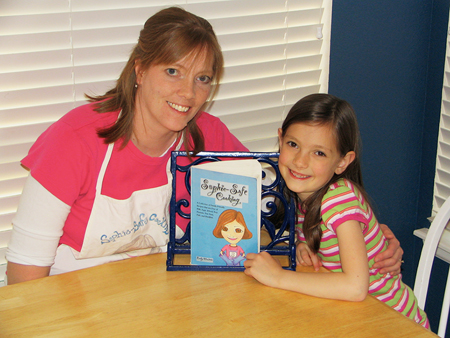 When her daughter Sophie showed signs of multiple food allergies, Emily Hendrix got creative and now has a cookbook to show for it.

When Emily Beer Hendrix (BA ’95) got married, she knew little about cooking beyond boiling water. But six years ago, after her third daughter was born with severe food allergies, the Broomfield, Colo., mother didn’t let her lack of experience scare her out of the kitchen. Thanks to Hendrix’s persistence, her daughter and others with food allergies now have access to a whole book full of safe recipes.

“We discovered Sophie had allergies at three months,” Hendrix explains. “My husband gave her a drop from a root beer float and she immediately developed hives from the top of her head to the bottom of her neck. It was a heavy-duty reaction, and at the time we didn’t realize it could be life threatening.”

As Hendrix nursed Sophie, she tracked her own eating to gauge Sophie’s reactions and develop a sense of her allergies. “When I ate a peanut-butter sandwich, for example, Sophie threw up the entire feeding. Peanut butter is especially troubling. When she simply entered a room where someone was spreading peanut butter on bread, Sophie instantly developed hives.”

Sophie received her first round of allergy tests at nine months, and, in addition to peanut butter, she had serious reactions to milk, eggs, wheat, tree nuts, fish, and shellfish. Of the eight most common allergens, the only one Sophie could ingest without trouble
was soy.

“Your life really changes in the face of these challenges,” says Hendrix. The family, including husband Jeffrey and daughters Sharon and Michelle, decided to do whatever was necessary to ensure Sophie’s safety. “Our dinner meal contains foods Sophie can eat,” says Emily, “while other meals are more flexible to accommodate all our daughters’ tastes.”

Following Sophie’s diagnosis, Hendrix quickly learned the need to read every food label meticulously. “I even check foods we have purchased previously.” She recalls being devastated when wheat was added to a cereal Sophie liked. “I burst into tears right in the store. It is important to have a few ready-made things for Sophie, so losing this cereal was distressing.”

The family also stopped dining at restaurants. The rare times they eat out, Hendrix consults with the manager to find ways to give Sophie a choice. One concern is that, though a food itself might be safe, it may be prepared near foods that are not.

Hendrix’s best alternative became home cooking. Using family recipes and cookbooks, she began experimenting. For example, she took a banana bread recipe and adapted it, using substitutes for the wheat flour, eggs, and milk. “By the time you make so many changes, it’s not the recipe everyone grew up with, but it’s pretty darn close.”

Hendrix often fine-tunes recipes as many as 30 times before she is satisfied with the taste and texture. She is happiest when she makes something and others want the recipe. “For Sophie’s birthday, I took fudge cookies with frosting using oat flour to school,” she says. “A parent and the teacher each asked for the recipe.”

When she met other children with allergies who ate only a few foods because their parents didn’t know they had other choices, she decided to publish a cookbook, which she titled Sophie-Safe Cooking. “These recipes are really good and made without the eight common allergens,” she says, “I had not been successful in finding a cookbook to purchase, and I really wanted to help others.”

Hendrix’s goal was to sell 100 books and help a few of the 11 million people in the United States with food allergies. Publicized only by word of mouth and news stories, Sophie-Safe Cooking has far exceeded Hendrix’s expectations, selling more than 1,500 copies.

“I suppose I could do more aggressive marketing, but I’m a mom first,” she says. “I’m just happy when children can thrive with these recipes.”

David Draper's 10 years of research on injury rehabilitation culminated in a national award.

Hundreds of service hours earned Karen Call a BYU first and helped her recover from depression.