As her oldest son grew, Emily Gwilliam Layton (BS ’97) began to notice things happening with his spiritual development that she didn’t understand. She had majored in child development at BYU, but she couldn’t remember this topic ever being addressed. The next year, she returned to BYU for graduate school to study that very subject—adolescent spiritual and religious identity development.

Layton became interested in a re-search project conducted by David C. Dollahite (BA ’83), professor of family life, that included interviews with youth of many different faiths. As she immersed herself in the interviews, she began to see how the teens’ relationships were key in their level of commitment to their faith group.

“You can’t separate relationships from how youth experience their faith and why they feel—or don’t feel—committed to their faith,” says Layton. Her fascination with the topic has resulted in three journal articles, including an article published recently in the Journal of Adolescent Research. Coauthored by Dollahite and Sam A. Hardy (BS ’99), assistant professor of psychology, the article describes seven anchors that help adolescents develop commitment to their religion—religious traditions and rituals; God; denomination; faith community members; parents; scriptures or sacred texts; and religious leaders. All of the anchors are important in the livesof LDS teens, but three appear especially helpful in fostering relationships that, in turn, build religious commitment. 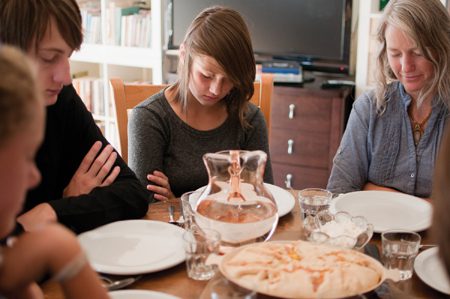 Religious traditions and rituals are the external behaviors that communicate both to the participant and to others that “I’m committed to this religion,” such as singing in a church Christmas choir or sharing a special meal for religious holidays. Teens aren’t always interested in the meaning that underlies traditions, says Layton, but rather focus on the relationship fun—being with friends and family.

“Those together times are the ones they remembered most, and when a family had stopped doing those traditions, they spoke of how much they missed that,” says Layton. “Sometimes kids drag their feet and don’t cooperate, so it’s important to realize that even though they can be resistant, traditions are one of the first things youth identify as important to them about their faith.”

Her research motivated Layton and her husband, Todd, to elevate family routines into relationship-rich traditions. For general conference, they now have a special crepe breakfast together, and each child picks out a treat to share as they watch. They also hang a poster of the General Authorities, and the children circle the speakers. “Each of these things individually isn’t very significant, but together they’ve made a huge impact on how our kids feel about conference. They’re so excited when it’s that time of year again, and they willingly sit with the family to watch every session because it’s a fun together time,” says Layton.

Layton says family traditions aren’t always a source of religious strength in and of themselves, such as visiting temple grounds each fast Sunday or placing flowers on the graves of pioneer ancestors on Pioneer Day, as the Laytons do. It’s the experiences that occur around these outings that matter: “The conversations that take place are so important, and these traditions put our children in a place that they can have a meaningful personal spiritual experience when the time is right for them,” she says.

Layton and her colleagues found that adolescents feel committed to their religion through serving and receiving service from members, having fun together, and relating to people of all ages. The Church has programs to foster all these ways of connecting. Parents should assess their teen’s needs individually and emphasize church opportunities accordingly.

One teen might find it meaningful to babysit for free while ward members go to the temple. Another might find deeper connection to his or her faith by inviting seniors to dinner or a family home evening. Parents might also suggest their children write thank-you notes to leaders, especially after huge efforts like Scout camps and Young Women camp.

Layton says a potent relationship dynamic occurs as youth seek counsel from members of their ward about academic pursuits, career interests, and personal struggles. “It’s powerful when the youth get similar counsel from different adults based on religious principles and character values. That ‘second witness’ is so important during those years when youth are yearning for direction and yet wanting to establish a sense of independence from Mom and Dad,” she says.

A Relationship with God

Many of the teens in the study talked about God in terms of someone they turn to for counsel, someone they feel a duty toward, and someone they trust, honor, and respect. Layton believes parents and youth leaders can help teens strengthen this anchor by talking about their relationship with God in their own lives. If a teen asks a question or comments about God, parents can seize that opportunity to open up a dialogue.

“It’s tricky to get adolescents to talk about these things,” says Layton, “but the more we do, the more it will become important. It doesn’t have to be long conversations. Sometimes simple comments that you know God cares about them or that you know the Lord will guide them in making a tough decision can have a huge impact.”

It can be especially valuable for parents to share experiences they’ve had with seeking counsel from God or with feeling blessed because of respecting God or keeping commandments. It’s also important to relate frustrations and disappointed feelings about God that parents have resolved. As teens witness their parents cherish this sacred relationship and work through its intricacies themselves, they will be more likely to build their own connection with deity.

Layton suggests parents assess the strengths and weaknesses of these anchors in their family life, then adjust what’s not working so well and reinforce what is. “Improvements should start simple, and it is always best to build from what is already strong and add to that. Build up traditions and be consistent with them. Give youth opportunities to lead and teach and share their views in family home evening settings. Encourage intergenerational relationships within the ward and stake. Remember that something doesn’t have to be outwardly religious to have an impact on their faith.”

Parents should also frequently assess the quality of their relationships with teenaged children. When parents are open and loving, a teenager is more likely to respect their values and seek their counsel. “As independence increases, youth will continue church activity because it’s important to them, not just because their parents want them to. Many things will come along to challenge faith—from conflicting demands on time to secular worldviews—but if faith is well rooted, it can remain strong,” says Layton.

Some parents might wonder, as did Layton before she began this research, whether relationships can or ought to trump personal testimony as a reason to stay involved in church. Layton believes both are important, but sometimes it’s easier to emphasize testimony and downplay the significance of relationships. “The message of this research is that bonds with youth leaders matter. Your relationship with God matters. Family traditions that build faith matter. The time and effort and consistency parents give really matter. Youth need all these factors to help them anchor their faith. Testimony comes as a result of connection with the Spirit, but that connection is fostered by a hundred smaller connections that put youth in a place to be open and receptive to the Spirit.”

The adolescent faith study is one part of a larger research project Professor David C. Dollahite (BA ’83) is conducting called the American Families of Faith Project. With Loren D. Marks, associate professor of family studies at Louisiana State University, Dollahite and his team are conducting in-depth interviews with nearly 200 religious couples and families throughout the United States. So far, more than 30 scholarly articles and chapters have been published; topics include how religious involvement promotes marital fidelity, how religiosity influences marital commitment, and how highly religious youth and parents discuss their faith.

See the most singular ways LDS doctrine stands apart—and why Mormons should be fearless living it.

Drawing Out the Withdrawn Child

Parents can create opportunities for their shy children to conquer their fears.