When Moses S. Kinikini (BS ’90) underwent a health assessment to see if he qualified for the rigorous reality TV weight-loss program The Biggest Loser, he expected the show’s physician to tell him that while he was 47 years old, he had the physical health of a 65-year-old.

Instead Dr. Robert Huizenga told him he was going to die. 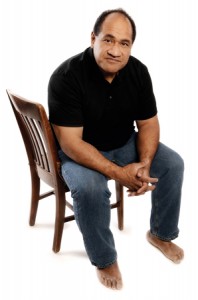 “Dr. Huizenga predicted I would die April 23, 2024,” says the Shelley, Idaho, resident, who tipped the scales at a whopping 475 pounds when he and his daughter Kaylee were selected. “I was blown away. I began to cry, not for myself, but for my 8-year-old daughter, who would lose her father in her early 20s if this happened.”

Not willing to accept this fate, Kinikini took advantage of every opportunity available on The Biggest Loser ranch, where the reality show’s overweight contestants undergo rigorous fitness and nutritional training to lose weight, vying for the biggest percent loss and top prize of $250,000.

By exercising and eating healthy meals with vegetables, whole grains, and fruit, Kinikini lost an almost unheard-of 41 pounds at the first weigh-in. He then broke a record by becoming the first participant to lose 100 pounds in six weeks.

The doctor revised his health projections and added 19 years to Kinikini’s life.

Unlike many contestants who cannot remember a time they were not overweight, Kinikini grew up athletic, keeping trim and playing volleyball. But within two decades of graduating from BYU, his weight had escalated toward 500 pounds.

“I’m strong,” he says, “so even at 320 pounds, I could still play aggressive volleyball. When the scales tipped 360, however, I stopped altogether. It was too difficult.”

In 2010 he and Kaylee tried out for the 10th season of The Biggest Loser and stood in a long line of hopefuls when the production team came to Salt Lake City. They did not make the initial cut but received a VIP pass for the 11th season.

At the season 11 group audition Kinikini had about five minutes to convince the producers he and Kaylee should be selected.

“One of the girls said she didn’t know whether she would like herself if she became a thinner person,” he says. “I jumped in and said, ‘You will. I’m sure your parents have always told you how special you are, but you’ve probably been in a world that has made you question whether that’s true. This show could help you see your true self-worth, which has always been there.’ I thought about my own daughter and started crying. By the time I finished talking, everyone in the room was in tears.”

Kinikini and Kaylee earned a spot, and the hard work began. 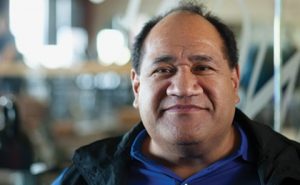 “I began to see a different side of my father,” Kaylee says. “He has always been a good provider and strong priesthood holder, but I had never seen how hard he could work for a goal. Like a lot of us, he had been a flip-flopper when it came to losing weight, but this time he just stayed focused. It’s inspiring to see that the changes he made have stayed with him.”

“Yet I wanted to stop many times,” Kinikini says. “The workouts were demanding, and I got so exhausted that my inner chatter sometimes told me to quit. When I saw my daughter and team members, though, and saw how hard they were working, I had to keep going. Many of them told me they felt the same about me and said, ‘Look at Moses. He keeps going—and I can, too.’”

He compares much of what they did on the ranch to the pioneers. “They traveled as a group. There was likely a day when Brother Smith would wake up and be so tired he wanted to stop, but Brother and Sister Jones would reach out to him and help him live through another day. The next day, Brother Smith might do the same for someone else. I felt that way about the group experience on the ranch. We rejuvenated each other.”

Kinikini also says he benefited from digging deep inside to discover how much he wanted to change. “I had to realize that I was worth it and so was my family. I figured out after the first day that I needed to surrender to the experience, the trainers, and the medical staff. I also learned that while [trainer] Jillian Michaels might yell in my face, ultimately it was up to me, not her, to change my life.” 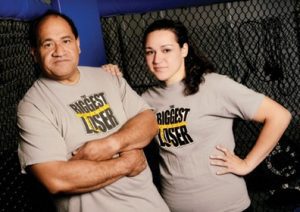 After losing 153 pounds Kinikini was voted off the show in the 15th week (out of 20). He asked to be eliminated because the other contestant in jeopardy was 35 years old and wanted to lose weight in order to finally get pregnant. “I wanted to give her every possible chance to reach that dream,” he says.

In the two years since his experience on The Biggest Loser, Kinikini has deliberately gained a few pounds to build muscle. “My wife told me I looked trim but weak when she saw me, and to tell a Tongan man he is weak is not good.”

Because he now has a passion to help others transform their lives, he has become a full-time certified trainer for the Apple Athletic Club in Idaho Falls, Idaho.

Kinikini trains people on their exercise and nutrition. “I like to say that God is right: the Word of Wisdom is the best eating plan.”

In addition to exercise, get fit by following these five SMART food tips from Diana Harman McGuire (BS ’74), a retired BYU food science professor who has taught weight management techniques for more than 20 years.

2. Measure Portions. When you can’t control food choices, you can control portions. Even “healthy foods” need portion control. Avoid the BLTs: bites, licks, and tastes. They add up.

3. Account. Have a means of accountability. You will feel better if you check your progress. But eliminate defeatist thinking—“on the diet or off the diet.” Healthy eating is a matter of healthier food choices one at a time.

4. Regularly Eat. Never get too hungry. You should feel moderate hunger before eating and moderate satisfaction after eating. Most people should eat at least three meals plus two or three snacks a day.

5. Take in Types. Don’t exclude any food groups. You need the nutrients from every group. Balance, variety, and moderation are key. Try low-fat or fat-free items.

After the first week Kinikini was not allowed to work out for over two weeks because he had developed pre–stress fractures in his ankles. His trainer taught him boxing techniques, and while the others were at the gym, Kinikini sat on his bed and air-boxed vigorously to Michael Jackson music. “I tell people to find ways to just keep moving; it makes all the difference,” Kinikini says.

The majority of the exercise on the show is aerobic. While audiences will see strength and resistance training, most of that is for the cameras. “This is a weight-loss program,” Kinikini emphasizes. “Rigorous aerobics is the best way to lose weight.”

One-fourth of the 24 contestants for season 11 were members of The Church of Jesus Christ of Latter-day Saints. Kinikini received permission from his bishop to administer the sacrament, and on Sundays Church members still in the competition would meet in Kinikini’s room for the sacrament and to share testimonies.

This alum has traveled the world and conducted more than 2,000 interviews for television.

From adrenaline junkies to budgeting gurus, these eight BYUTubers are racking up the views online.