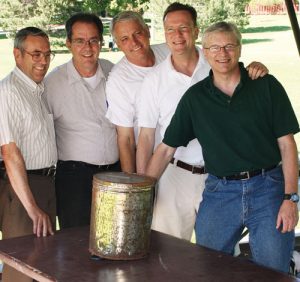 Thirty years after hiding a time capsule in their BYU apartment, former roommates reconvened in Provo to open the repository, in which they found memories they expected–and a little bit more.

As David S. Eddington (BA ’86) reached into a black garbage bag that had been crammed into a dented popcorn tin 30 years earlier, he unearthed artifacts that reflected his and his roommates’ interest in their female counterparts.

A black metal plaque read: “The secret of catching a woman: Hide in the bushes and make a noise like a fur coat.” A prescription container from the Heart Throb Pharmacy offered “pills” for controlling passion, and a small vial of breath spray that guaranteed sweet breath still contained liquid. One of the more debonair males had included a sleek charcoal suede shoe.

A musty smell at the bottom of the sack led to nearly 100 wedding announcements in the style of the day—sepia or ivory parchments with black-and-white images of couples embedded in the now-yellowing paper.

Eddington was one of numerous students who spent several years at 617 N. 800 East, Provo, in a home affectionately known as the Green House. As a way to memorialize their BYU experience, when the house was converted to single-family living the roommates created a time capsule and placed it in a hollow space under the concrete stairs, the cache hidden behind a board attached to an interior basement wall.

When Eddington returned to BYU to teach seven years ago, he looked up his old residence and was relieved to see that, while many houses had been demolished, the Green House was still standing, albeit no longer green.

“I was intrigued,” he says, “so I knocked on the basement apartment and told the married couple living there about the time capsule. It was right where we had put it in 1980.”

Thinking a ceremony was in order, Eddington invited his former roommates for an unveiling. Six men, ages 48 to 62, showed up at Provo’s Kiwanis Park early this summer to pry open the rusted container. Robert M. Gertz (AA ’75) flew in from Casa Grande, Ariz., and Michael P. Lambson (BS ’82) came from Inglewood, Calif. The others are Utahns: Steven H. Jensen (BA ’71), of West Valley City; Chris Lambson, of Sandy; Alan K. Lambson (BA ’76), of Orem; and Eddington, of Spanish Fork.

The container still included a letter they had placed in it 30 years earlier: “On the occasion of the closing of a great institution, the Green House, . . . we the undersigned residents affix our names and these mementos of our stay in memoriam of our affiliation to this home of students for some 25 years.”

Alan Lambson showed genuine surprise when he saw his own name. “I actually signed this,” he said. “I just don’t remember doing it.” The letter is dated Aug. 27, 1980, so the forgetfulness is not too surprising.

Some items in the capsule were familiar. Others were not. Gertz recognized the top of his old lacrosse stick, which he now calls a “museum piece.” As they continued the unveiling, they noticed a note in the bottle of passion control pills that read, “With the great knowledge that one Jeff Cannon has, we were able to break into the so-called unfindable time capsle [sic] that our past renters placed in to Destiny. We have taken the liberty to deposit our own mementos.” The note was dated September 1982, two years after the original hiding of the time capsule.

“Ah, no wonder we didn’t know where the plastic horse came from,” said Gertz, also waving an unfamiliar hairbrush.

“This actually delighted us,” says Eddington, who is grateful the capsule was returned to its hiding place. The men were particularly pleased with the wedding invitations they had tucked away. Memories returned as they pointed out familiar faces and swapped stories about who dated whom and how certain couples ended up together.

Alum Stephanie Jarstad photographs couples whose marriages have stood the test of time.

Sometimes a student just needs to get away.