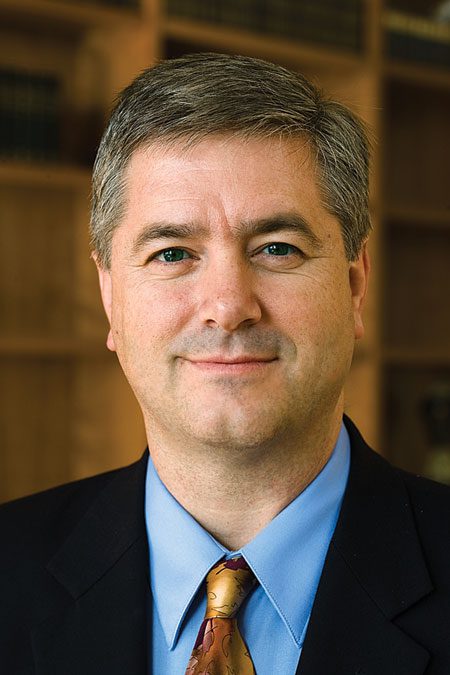 Dee Allsop, who has managed the image of companies and presidents, now leads the BYU Alumni Association.

A strategist who worked at the highest level of American politics during the Ronald Reagan administration has been named president of the BYU Alumni Association. Dee T. Allsop (BA ’81) replaces former president Bruce L. Olsen (BA ’63), who has been called to serve as the president of the San Diego California Temple of The Church of Jesus Christ of Latter-day Saints.Allsop’s work with Reagan reflects a fascination with American elections and politics that began while studying political science at BYU and Ohio State University. He cemented his career aspirations as an undergraduate when he connected with Richard B. Wirthlin (’64) of the Wirthlin Group (later Wirthlin Worldwide) to work on Reagan’s presidential campaign.“It was exciting,” Allsop says of the era. “I especially appreciated my affiliation with Richard. He was so prominent politically, yet he was equally strong in his religion.”During the Reagan years, Allsop helped developed a model to manage Reagan’s political capital and image. “I worked with Richard in the early days of my career almost entirely in the political world,” says Allsop. “Then around 1988, we decided to also use our modeling techniques for corporate image analysis.”One of his first projects was in the steel industry where Allsop worked to change its image from old, dirty, and stodgy to high tech, clean, and vital. For his efforts, he received the David Ogilvy Award in 2000.“We identified that much of the perception of the steel industry came from women,” he says. “Rather than conveying it was not old and dirty, we communicated how steel had an important role in their lives. Steel made their cars more safe and secure. It made their lives better in the steel framing and construction of homes to withstand hurricanes. We focused on the clearly valuable elements of steel, and it worked.”Among his other clients were Marriott, Boeing, and General Motors. Allsop also worked on California’s Proposition 22 campaign in 2000, which modified California law to define marriage as between a man and a woman.In 1996 Allsop; his wife, Charmaine; and their four daughters moved to Alpine, Utah, where Allsop planned to finish his career with Wirthlin Worldwide in Utah. Instead, four years later Richard Wirthlin asked him to move to Washington, D.C., and become chairman and CEO of Wirthlin Worldwide. When Harris Interactive purchased the company in 2004, Allsop stayed on for four years as president of Harris Interactive Solutions Groups. In the summer of 2008, Allsop started and became the president of Heart and Mind Strategies, a market-research firm, near his home in Fairfax, Va.Linda Palmer, executive director of the Alumni Association, says she looks forward to working with Allsop in his new role with BYU. “Dee is smart, accomplished, and respected in his discipline and is humble, gentle, and easy to work with,” she says. “He represents all the wonderful attributes we would want in our alumni. He will continue the masterful work initiated by his predecessors.”In his assignment with the Alumni Association, Allsop plans to use some of the tools that have worked well for him professionally. “We need to be more effective in letting our alumni know what we stand for,” he says. “Then we can keep them connected in ways that help them more effectively cultivate the spirit of the Y in their lives.”He emphasizes that such a spirit needs to be cultivated in the communities where people live—not just in their cities, but in their professional, global, and social communities as well.“BYU did many wonderful things in my life, and I have much gratitude to the university and the people there,” he says. “It is my turn to give back in a direct way.”

One Billion and Counting

From War Zone to Classroom

For this award-winning teacher, the Gulf War was a classroom.