When Dawn Armstrong left an abusive home, there was little to suggest that her future life would be any better than her past. Her mother, only 15 when Dawn was born, was an alcoholic and drug addict. So was her father. 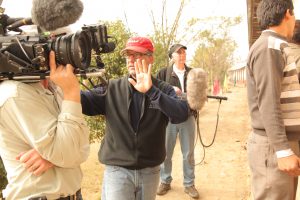 In directing and producing Meet the Mormons, BYU alum Blair Treu (center) worked to tell the stories of “extraordinary-ordinary” Mormons in a way that would be both entertaining and authentic.

On her own by age 15, Armstrong became a single teenage mother with one child and a second child who died. During one of the lowest points in her life, she met missionaries who taught her about The Church of Jesus Christ of Latter-day Saints.

Armstrong joined the Church, moved to Utah, eventually married another Church member, and had seven more children. As one of six stories featured in the new Latter-day Saint motion picture Meet the Mormons, her tale unfolds as she prepares her firstborn to embark on a Church mission.

“Dawn has the most dramatic story in the film, but all our stories are compelling,” says filmmaker Blair W. Treu (BFA ’85), one of several key alumni who signed on to create a movie for the Church four years ago. At the time Treu thought he would be writing, producing, and directing a movie to replace Joseph Smith: The Prophet of the Restoration, which had played for several years in Salt Lake City’s Legacy Theater inside the Joseph Smith Memorial Building.

That was and remains true, but the film’s reach has become more expansive. As Treu explored filming options, he suggested a documentary examining Latter-day Saints and how they handle the challenges of living their faith. His concept was approved and the finished product—Meet the Mormons­—was released in commercial theaters nationwide Oct. 10.

“If we want the world to know who we are, then we need to tell them our stories and build on common beliefs everyone shares, regardless of their religion,” he says.

To find the right stories Treu and his production team scouted the world—from the peaks of the Himalayas to the beaches of Costa Rica.

“We wanted our stories to be engaging, entertaining, and real,” says the film’s producer, Jeffrey B. Roberts (BA ’87, MBA ’90). “We considered doing some celebrity-type Mormons, but in the end we went for everyday stories.” Treu calls them “extraordinary-ordinary people.”

In addition to Armstrong, whose segment is titled “Missionary Mom,” the motion picture examines five others, each with a different story. 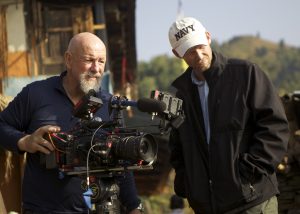 Director of photography Brian Sullivan (left), filming here in Nepal with fellow Meet the Mormons cinematographer R.J. Hill, calls the people who helped make the film – many of whom hail from BYU – “remarkable.”

“The Bishop” looks at Jermaine Sullivan of Atlanta, a young black bishop who balances his career with his ecclesiastical duties and the needs of his young family. Since the film wrapped, he has become a stake president.

“The Coach” highlights U.S. Naval Academy head football coach Ken Niumatalolo, who consistently wins the Commander-in-Chief’s trophy against the Air Force and Army teams, and who teaches Primary children on Sunday mornings when other coaches are having their staff meetings.

Carolina Marin, profiled in “The Fighter,” runs the largest kickboxing center and a general fitness gym in Costa Rica. At the time of filming, she was ranked second in the world among female kickboxers.

Retired career officer Gail S. Halvorsen (’74) is featured in “The Candy Bomber.” During World War II he started Operation Little Vittles, dropping candy attached to parachutes to children in the American sector of Berlin. Other crews soon followed his lead.

“The Humanitarian” is Bishnu Adhikari of Nepal, who uses his U.S. and Russian engineering education to build roads, schools, and water systems in areas that don’t have them. A dedicated Christian, Adhikari still reveres and respects his Hindu culture.

After pitching his ideas and getting the green light, Treu says he was given “the single charge of being authentic, real, and honest. We did not pull any punches or hide any weaknesses our story subjects have had to overcome.” Authenticity was key, but, he adds, “the film also needed to entertain, and while not portraying the specific details of our beliefs, it had to communicate that we are who we are as a result of living our beliefs.”

It was a tall order. But the work and the end result have “been a great payoff,” says film editor Wynn E. Hougaard (BA ’96), who adds that the project “strengthened my belief that Christ is a big part of my life.”

And for the handful of alums involved in making the film, the experience was also a reunion of sorts. “This is a movie whose production team went to BYU and learned on the shoulders of [legendary] professors,” says director of photography Brian D. Sullivan (MA ’83). “This movie is in large part the result of BYU.”

Treu calls Meet the Mormons his most important project to date, and says it reinforces the reason he went to BYU instead of another film school. “I decided long ago I would make films that wouldn’t offend,” he says. “From the beginning BYU taught me that you could make movies with powerful spiritual ethics and storytelling. Meet the Mormons is that kind of film.”

Mormon Lives in Fact and Fiction

Glimpses at Latter-Day Saint lives will fill up your summer reading.

RISE: From Mission to Movies

The movie The Other Side of Heaven began with an impression the director received while on his mission.