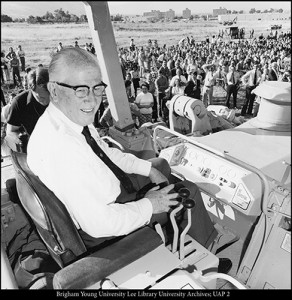 Jade E. Weinheimer (’14) had just finished her shift teaching Mandarin at the Provo Missionary Training Center (MTC) when she got an e-mail announcing that her living room had been called on a mission. In two months her apartment would serve as a missionary dorm, a language-training computer lab, or an MTC classroom.

Weinheimer and her roommates at Raintree Commons, an apartment complex northwest of BYU, had one month to move. “Any annoyance was far outweighed by my excitement that missionary work is progressing to the point where there’s too many missionaries to fit in the MTC,” says Weinheimer.

Starting in May 2013, Raintree and a portion of BYU’s Wyview Park housing complex became a temporary MTC outpost while The Church of Jesus Christ of Latter-day Saints reviews options for permanent MTC expansion. In the weeks following the October 2012 announcement lowering the minimum ages for missionary service, new missionary applications increased by 471 percent; 58 new missions were announced in February. The MTC strained to make room, shortening the duration of training. This summer, BYU and its students were called on to help.

Missionaries sleep, eat, attend class, and exercise at the temporary campus and are shuttled to the Provo Utah Temple. By the end of the summer, 1,000 missionaries will reside at Wyview and 700 at Raintree. “About two-thirds of the apartments in the Raintree buildings will be used as classrooms,” says Ruth Jones Todd (BA ’83), Church spokesperson. The remaining Raintree apartments and half of those at Wyview will house the missionaries. The other half of Wyview will continue to house BYU students.

Says Julie L. Franklin (BA ’89, MBA ’94), BYU director of Residence Life: “We are excited to be of service to the missionary effort.”

1883 The first mission-prep classes are taught at Brigham Young Academy. A yearlong prospective-missionary program, with courses in music, grammar, and penmanship, is initiated in 1899.

1976 The Church dedicates land for a self-contained missionary complex north of BYU that in 1978 becomes the Provo Missionary Training Center (MTC). It is staffed by BYU students and shares dining, custodial, and security services with BYU.

2013 The MTC temporarily increases its capacity by housing missionaries in Raintree and Wyview Park apartments, holding some summer devotionals in the Marriott Center. A permanent Provo MTC expansion is being explored.

The switch from missionary to BYU student has both awkward moments and triumphs.

RISE: From Mission to Movies

The movie The Other Side of Heaven began with an impression the director received while on his mission.