“Loose Him, and Let Him Go” 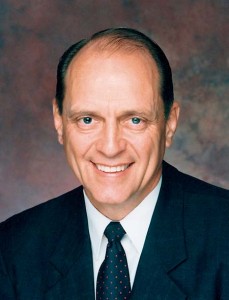 The complete text of this March 26, 2002, devotional address by Eric B. Shumway, president of BYU—Hawaii, is available at speeches.byu.edu/devo/2001-02/ShumwayW02.html.

Given the tremendous importance of . . . virtues now and in the world to come, should we be surprised if, to hasten the process, the Lord gives us, individually, the relevant and necessary clinical experiences? We do not usually seek these, however. Yet they seem to come, don’t they, even when we do not remember having signed up for a particular course? Sometimes we find ourselves enrolled again in the same course. Apparently we were only auditing before; perhaps this time it can be for credit! . . .The Lord loves each of us too much to merely let us go on being what we now are, for he knows what we have the possibility to become!—Elder Neal A. Maxwell, “In Him All Things Hold Together,” Fireside Address, March 31, 1991WEB: The full text can be purchased at speeches.byu.edu/Detail.tpl?sku=0890A.