Though a summer library program in Orem, Becky and Joel Wallin have been introducing children to Shakespeare for years. 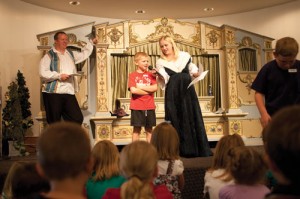 Though a summer library program min Orem, Becky and Joel Wallin have been introducing children to Shakespeare for eight years.

Becky Witham Wallin (BA ’01) whispers a line into the ear of a blonde-haired boy.

“Stop being in love. It’s dumb,” he repeats. That’s kid talk for “Cease to persuade, my loving Proteus: Home-keeping youth have ever homely wits”—a line in Shakespeare’s play Two Gentlemen of Verona.

The audience of more than 50 children and parents laugh and pull faces.

This is what Becky and her husband Joel (BA ’99) have done every Thursday for the past eight summers. They put on a Shakespeare for Kids program in the Orem (Utah) Library, giving kids a chance to act out the stories performed for centuries.

A collection of crowns, tunics, and swords sets the scene for everything Shakespeare, from the famous Romeo and Juliet to the lesser-known Cymbeline. It’s best to keep the costumes simple, Joel says. But they do use pillows for hunchback Richard III and don a girl with a hat, glasses, and a tunic when her character dresses up as a boy. “I think it’s just fun for them,” Joel says.

“And that’s our goal,” says Becky, “to get them interested in it before they get to school and think it’s boring.”

The kids do get excited, following the story line and jumping up to volunteer for parts.

“I love Shakespeare!” says 8-year-old Ashleigh Johnson after a show.

The Wallins brief the children on themes such as jealousy in Othello and differences between Shakespeare’s comedies and tragedies.

“At the end of every tragedy . . .” Joel prompts, and the children complete the now-familiar adage: “everyone dies.”

The Wallins, both theater graduates, actually met in a Shakespeare play, The Merry Wives of Windsor. Like a typical Shakespearean comedy, it led to marriage—theirs.

The couple started Shakespeare for Kids after the Orem Library contacted BYU’s Young Company, students who perform adaptations of Shakespeare for children. Becky accepted the task and Joel soon joined her.

“It’s something that the community and the children especially look forward to every year,” says Christy Crowe Hughes (BA ’07), Orem Library publicity and events specialist.

The kids say they enjoy the acting—although it makes them a little bit nervous. And mothers bring their children back year after year.

Vachelle A. Johnson grew up hearing her mother read Shakespeare plays to her and wants to instill a love of literature in her daughter, Ashleigh. “I’m really grateful they do this. It brings Shakespeare to life and helps ease them into Shakespearean language,” Johnson says. “[The kids] will want to explore more good literature because they have learned to love good literature.”

“The kids are excited about Shakespeare,” says Becky. “That’s what I love about it.”

Joseph FireCrow caught national attention when he was nominated for the 2001 Grammy Awards.

The BYU Emeriti Alumni Association will connect with friends worldwide this fall at the Huntsman World Senior Games.